And other information regarding the IDP Guys

This show was born out of listener leagues for the Detroit Lions Podcast in the 2016 season. Nathan would call into the podcast with updates each week about the winners and losers, and give quick snips of advice. By the summer of 2017 he got with his roommate Jon and came up with the early ideas that would turn into The IDP Guys. They got some equipment, brought on friends as guests and were absolutely terrible. But they didn’t give up, they improved over the season and have turned into the show you know and love.

They picked up Sean along the way, who joined kicking and screaming but stayed. He hails from the wild tundras of Minnesota, while Nathan and Jon are on the east coast. Hopefully one day they can come together and produce a show where they are all in the same room. 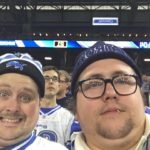 The story of Jon (@orangeman3142) and Nate (@natecheat) is one for the pages of history. They met as co-workers in 2009 when Nate moved out east from the midwest. It didn’t take long for them to become instant friends, and Jon invited Nate to watch some football. This was a new concept for him, having never cared for football. But Jon, who had been watching since he was 5, introduced Nate to the wonders of football and eventually fantasy football. For the next 7 years they could generally be found together on Sunday’s watching football and talking fantasy. In 2016 they became roommates. Jon works full time helping special needs individuals at a group home, and Nathan is a Graphic Design/ Journalism student who will graduate in 2019.

Sean started as a writer for the Detroit Lions Podcast, and still is, but he has also been a major part of The IDP Guys success. He spends his off hours scouting rookies and college players, so that he is incredibly knowledgable about them in the NFL. He basically doesn’t have a life, so if he isn’t behind a bar he has his nose in a piece of film. He is more of the offensive mind of The IDP Guys team, filling in a major role at co-host 3. Yes, that position is draft able in fantasy football. Also his Penny takes are trash… Fight Me!

One Of The Most Impressive IDP Sophomores Mikel Jones

The Big 3 IDP Podcast
Looking for an edge in your IDP fantasy football league? Let the Big 3 guide you down the path to a championship! Josh Raymer, Adam Marcum, and Connor Raymer grew up playing fantasy football and have become obsessed with the defensive side of the ball in recent years. The Big 3 IDP Podcast brings a mix of humor, high-quality production values, and quick-hitting IDP analysis you can't find anywhere else. When it comes to IDP, you gotta have the Big 3! Also home to the Injury Report with Dr. Leezus and DF$$$, hosted by Adam and Johny the Greek from IDP Guys. Support this podcast: <a href="https://anchor.fm/big3idp/support" rel="payment">https://anchor.fm/big3idp/support</a>
IDPs as Thanksgiving Foods
by Josh Raymer

Happy Thanksgiving to our fellow degenerates! The Big 3 are thankful for all your support over the past year plus, even as we tell bad jokes about being “cool uncles.” In this episode, Josh, Adam, and Connor lament Joe Burrow’s injury, hit the top waiver wire targets from our boys Mike Woellert (4for4) and Kyle Bellefeuil (IDP Guys), and then wrap things up by comparing 18 IDPs to Thanksgiving foods—what an honor! Shout out to our patrons Joseph, Bobby, Jason, Nico, Lorne, Aaron, Tom, and djkelltown! Follow the show @Big3IDP on Twitter and Instagram, give us a 5 star rating and review on Apple Podcasts, and consider supporting the show over on Anchor. Thanks for listening!