The Seahawks have some linebackers who may not be with the team for 2019. Whether it be pending free agency or pending prison sentence, they need somebody to step up. Who will be that man?

The Seahawks outside of Bobby Wagner are at a crossroads at the linebacker position. Mychal Kendricks has played well with the team but has been cited for insider trading and is likely facing some sort of jail time, at least a couple months. K.J. Wright was only healthy enough to play in six games last season. They need to do something to fill the position and it may come internally. It took Austin Calitro four teams, the Seahawks twice, in a little over a year but made a significant impact with the Seahawks in 2018.

Calitro had a productive rookie campaign for 2018. He appeared in all 16 games while starting in five. He started in weeks 2, 3, 6, 13, and 15. In each of those weeks, he filled in for either Wright, Kendricks or Bobby Wagner. He only played in 28.5% of the Seahawks snaps but was very relevant on the field. In 2018, he accumulated 45 tackles (32 solo), three tackles for a loss and one pass defended and half of a sack.

Calitro started week 2 with both Wright and Wagner out playing 100% of the teams defensive snaps. With both incumbent starters out he racked up nine tackles (six solo), one tackle for a loss, and a pass defended. This was his first dose of heavy playing time and showed out well.

The next two starts for Calitro were lackluster. In week three, when Wagner came back, he only played in 14% of the snaps as Kendricks played more with Wagner. In week 6, he only saw 23% and did not achieve much on the field. Calitro then found himself riding the pine for the next few games until week 11.

In week 11, Calitro did not start but played on 88% of the team’s snaps. Going against a shaky Green Bay team, he tallied five tackles (four solo) and half of a sack. The sack was a display of a relentless motor. That is Calitro’s strongest trait. Watch here as his initial burst at the line is stuffed but never gives up on the play and gets to quarterback Aaron Rodgers:

He brought the momentum from this game into week 12 against the Carolina Panthers. Although he only played 34% of the team’s snaps he still walked away with four tackles.

This led to him getting his fourth start of the year in week 13 against the San Francisco 49ers. In his game against, the 49ers the combination of Calitro and Bobby Wagner was electric. They combined for 22 tackles (15 solo) and four tackles for a loss. Calitro accounted for 10 tackles as well as half of the sacks. Watch here as Calitro plays the run well with nice hesitation and then fills the gap:

I'm re-watching film to evaluate Poona Ford, but Austin Calitro has been on my radar for most of the first half. Flying all over the field… he kind of looked like Wagner pausing for a second and then bolting into the backfield on this play. pic.twitter.com/2tKrusZqv2

Calitro’s final start came in week 15 where he made another solid impact coming up with eight total tackles. He is great at finishing his tackles.

Austin Calitro didn't get invited to the combine, didn't get drafted, and was signed and released by the 49ers before finding his way to Seattle. Now he's among the league leaders in tackles per opportunity.

Can He Play Next to Wagner?

The answer is yes, he definitely can as they actually compliment each other very well. Wagner is one of the better linebackers in coverage and is one of the best tacklers in the league. Calitro is a very strong tackler and plays great against the run as show by the statistic and clip earlier.

In Calitro’s last two starts, the duo combined for 37 tackles and four tackles for a loss. That is almost an average of 10 tackles a game playing next to each other in an extended run. This is something that the Seahawks should be intrigued by.

The question now for the Seahawks is do we re-sign our veteran who knows the defense well or do we give the job to somebody else? Let’s take a look back on this past season to see the comparison. Wright was never on the field in any of Calitro’s starts. Wright played in six games, starting all, and did not seem like his former self. In those six games, he totaled 23 tackles (15 solo), two tackles for a loss, and three passes defended. In those six games, he ended up playing a total of 22.5% of the teams defensive snaps. Take a look at this PAPS grade comparison between the playmaking ability: 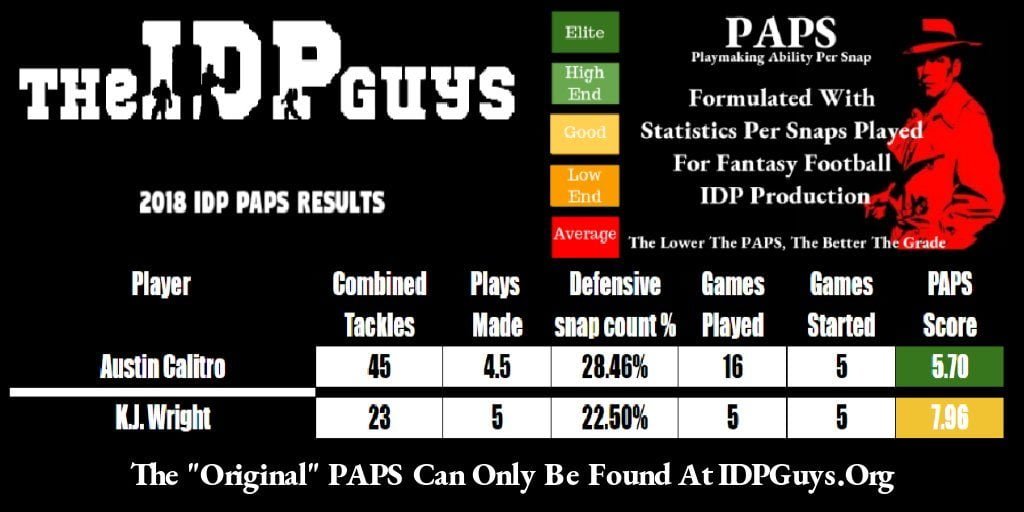 When looking at the PAPS grading, Calitro grades out as an elite playmaker. Calitro only played in almost 6% more snaps this season than Wright did. In that amount of time, Calitro was able to just about double the amount of tackles that Wright had. The main thing to take into consideration is that in Calitro’s best games neither Wright nor Kendricks were on the field due to injury and suspension. To double the amount of tackles in almost the same amount of time though gives me a good idea of who I would be starting.

The Seahawks are at a crossroads in there defense as almost all the players from the original Legion of Boom are gone. Bobby Wagner is the only real remaining player and they need to give them help. K.J. Wright turns 30-years-old in July and was only able to play in five games this season. Mychal Kendricks has a pending prison sentence that we still do not know how long the acutal sentence will be. The Seahawks have the answer right there on their bench in Austin Calitro and they would be wise to give him the starting gig. Once Kendricks does come back, he can play the strongside and form a nice trio with Calitro and Wagner. Calitro is the next man up.

Don’t forget to follow me on Twitter @JoeyTheToothIDP, @IDPGuys, and @NoBSidp. Also, tune in to the weekly IDPGuys podcast for the most up to date info to help you win your fantasy football leagues. Coming in March you can also watch our new podcast, The No BS IDP Content Podcast starring the Scott Fish Bowl Winner himself @FFstompy, The IDP Tipster himself @Hbogart27, and myself. Check out the PAPS Database created by The IDP Tipster on our site as well. Remember… The Tooth has the taste for IDP.

Under The Radar IDP Targets For The Rest Of The Season

Week 12: One Week Out From Fantasy Playoffs

The Big 3 IDP Podcast
Looking for an edge in your IDP fantasy football league? Let the Big 3 guide you down the path to a championship! Josh Raymer, Adam Marcum, and Connor Raymer grew up playing fantasy football and have become obsessed with the defensive side of the ball in recent years. The Big 3 IDP Podcast brings a mix of humor, high-quality production values, and quick-hitting IDP analysis you can't find anywhere else. When it comes to IDP, you gotta have the Big 3! Also home to The Injury Report with Dr. Leezus and DF$$$, hosted by Adam and Johny the Greek from IDP Guys. Support this podcast: <a href="https://anchor.fm/big3idp/support" rel="payment">https://anchor.fm/big3idp/support</a>
Week 13 Waivers + Who Do You Trust?
by Josh Raymer

A banging new intro song AND new cover art??? It’s Christmas come early in the virtual Sode Shack as Josh, Adam, and Connor gather together for their meatiest pod in a while. On the eve of Week 13, The Big 3 hit the news before GOING IN on some key waiver additions (offense and defense, with a dash of dynasty IDP) and rate their trust in 18 players who could make or break fantasy seasons. Let’s go win some games and make those fantasy p-offs! Shout out to our patrons Joseph, Bobby, Jason, Nico, Lorne, Aaron, Tom, and djkelltown! Follow the show @Big3IDP on Twitter and Instagram, give us a 5 star rating and review on Apple Podcasts, and consider supporting the show over on Anchor. Thanks for listening!