Looking to upgrade your fantasy team’s cornerback position? Then corner the market with these five players and get the advantage on the rest of your league!

The cornerback position is one that most owners stream. That’s understandable considering the lack of scoring they provide overall. They are the little brothers of the IDP world. However, there are a handful that can hold their own with the big positions in the IDP world, especially if it’s a position-specific league. There were five players last season that recorded at least five interceptions and fifteen pass breakups, and all five were, you guessed it, cornerbacks. Of these five, there are a couple of big names and three that you might not have guessed. Corner the market and get these players on your rosters. 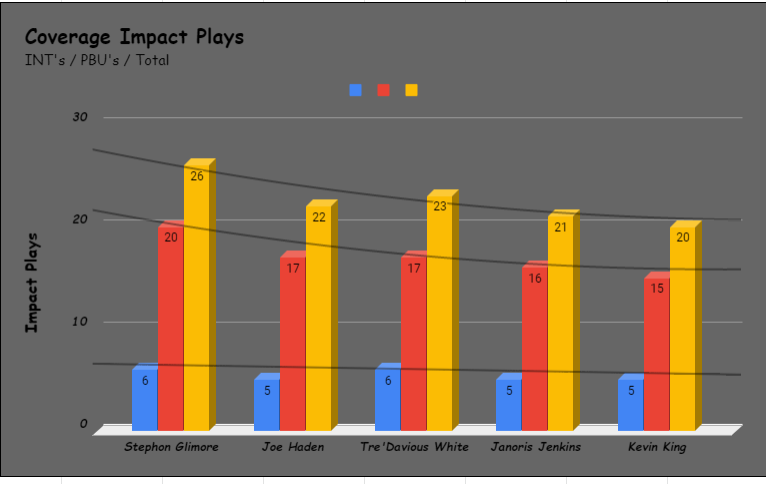 The first player to corner the market with is New England Patriots superstar corner Stephon Gilmore, who was named the 2019 Defensive Player of the Year. Gilmore became the fifth cornerback in league history to win the award and the first since Deion Sanders (1994). Gilmore registered 53 tackles (44 solos) and led the league in both interceptions (6) and pass deflections (20) and returned two INTs for touchdowns. It’s not often that you see a team’s best corner put up numbers this impactful, as they are avoided on a regular basis by opposing teams. However, Gilmore isn’t your ordinary cornerback. He has finished in the top ten in pass deflections, four different seasons, and interceptions twice.

Our second player on the list is three-time Pro Bowler Joe Haden for the Pittsburgh Steelers. He has spent three seasons with the Steelers, after having served seven seasons previously with the Cleveland Browns. This past season Haden tallied 65 tackles (59 solos), three tackles for a loss, five interceptions, and seventeen pass deflections. This was the second season in his career in which he was able to hit the 5/15 mark. Haden has finished in the top ten in pass deflections on five different occasions and interceptions twice.

The next player to the corner the market with is Buffalo Bills’ young gun, Tre’Davious White. Unlike veterans Gilmore and Haden, White has only three years of service in the league. White plays light years ahead of his experience level. Last season, White recorded 58 tackles (48 solos), four tackles for a loss, two forced fumbles, six interceptions (tied for the league lead), and seventeen pass deflections. White has finished in the top ten in pass deflections in two of his three seasons playing in the league.

We continue to corner the market with our fourth player to make the list, Janoris Jenkins of the New Orleans Saints. Jenkins is an intriguing player on this list, in that, he was traded late in the season from the New York Giants to the Saints. Getting traded in the season means one of two things, 1. The controlling team is cleaning house or 2. The buying team needs a piece for a playoff run. In this case, both were true. His combined stats for the season were 61 tackles (50 solos), five interceptions, and 16 pass deflections. Jenkins has finished in the top ten in pass deflections three times and interceptions once.

Last but not least, corner the market with the Green Bay Packers, Kevin King. Another youngster on our list broke out in his third year with the Packers. With a full season as a starter, King rewarded them with a breakout season:  66 tackles (56 solos), 3 tackles for a loss, five interceptions and 15 pass deflections. It was also his first season finishing in the top ten in both categories.

With only five players achieving the 5 interceptions and 15 pass deflection mark, you can see it’s an exclusive club. Don’t overlook these guys. Instead, look to corner the market by adding them to your rosters. Most fantasy owners stream the cornerback position, so you can possibly get all these guys cheap and receive a huge return from them. Due to cornerbacks being habitually overlooked, you can acquire them easily through throw-ins in trades. In the IDP world, there can be a lot of underrated players or positions that can produce a lot of points for your team, so don’t be afraid to seek them out.

Most owners perceive cornerbacks as low-value players. This evaluation makes them the perfect buy-low options for your fantasy teams. Go ahead and corner the market with these six players and strengthen your team’s hold on the position. The return you can get from these players will make your investment worthwhile and pay off big your fantasy teams.

Thanks for reading my article and if you enjoyed it, you can read more of my articles at IDP Guys and Dynasty Football Digest. You can also follow me on social media, on Twitter at Hollywood@HollywoodTitan, on Facebook on my IDPNation page, on Reddit in the fantasy football IDP sub I’m user KingTitan1 and you can tune in each week and listen to the podcasts, IDP Nation & Devy IDP Grind, that I co-host, on a number of different platforms. Feel free to hit me up with any questions that you have, as I’m always glad to help fellow IDPers. #IDPNation #IDP #IDPDevy