The defensive line is one of the hardest positions to figure on a week to week basis. Here we cover the top starts, sits, and sleepers based on their offensive line matchups.

The defensive line is the biggest boom or bust position in fantasy football. Judging who to play on a weekly basis can get very tricky. We here at IDPGUYS are trying to help in as many ways possible to give you the edge each week to win your matchups. This is an article I will be writing each week from here on out to see who the top defensive end starts, sits, and sleepers are based on their matchups. I will not be including the stud starts, those are the easy decisions. These are your depth guys who could be worth a start with upside matchups. With that said I will include stud sits for the week, let’s see what we are looking at.

Matchup- Tennessee Titans (Give up the most points to defensive ends)

Vic Beasley said earlier this year that he wants to be in the double-digit sack mark again. He wants to prove that his one season leading the league in sacks was not a fluke. So far this season he is starting off better than he has in the past two accumulating 1.5 sacks in his first three games. Another encouraging stat is the fact he has five QB hits in those games. Beasley gets to face the Tennessee Titans in week four which is a juicy matchup.

The Titans have given up 16.5 sacks so far this season in only three games. That includes 11 sacks to the DE position alone and seven just last week to the Jacksonville Jaguars. Vic Beasley is the Falcons best pass rusher and should have no problem coming up with at least one sack on Sunday.

Melvin Ingram is coming off of a down year compared to his previous three. This could be in large part to the fact that Joey Bosa missed most of the season allowing more focus on Ingram. This season he only has one sack. However, he is averaging almost five tackles per game with one for a loss per game. He faces off with the despicable Miami Dolphins in week four.

Matchup: Cincinnati Bengals (Give up the 4th most points to defensive ends)

Stephon Tuitt has started off 2019 absolutely on fire, racking up 13 tackles and 3.5 sacks in his first three games. He has been very steady at the defensive end position with the Steelers averaging 40.25 tackles, 7.75 for a loss and 4.75 sacks per season since becoming a full-time starter with the Steelers. He is on pace to crush these numbers though and is the driving force on the front line for the Steelers. T.J. Watt and Bud Dupree soak up so much attention and push QBs up the pocket allowing Tuitt to make more plays.

Cincinnati’s offensive line has not been great and have given up 11 sacks in three games this season. Worse than that though is their run blocking, which only has a stuff rate of 35% on all carries which ranks last in the league. Tuitt is great at defending the run to go along with his pass rush. Tuitt should continue his breakout season against the Bengals.

Matchup: Dallas Cowboys (Give up the 3rd fewest points to defensive ends)

Trey Hendrickson was one of the hottest waiver wire additions after week one and week two. He should continue to be rostered as his snap percentage totals continue to rise but he has a real tough matchup week four. Hendrickson cooled off a bit week three by not picking up a sack. He stayed consistent with his tackles though picking up three more. Three has been his weekly average but the sacks have been putting him over the top. If he is not picking one up he is on the bust side of boom or bust.

This week is the worst matchup possible for Hendrickson as he faces the top-ranked offensive line in the NFL. They have allowed only two sacks in the first three games of the season and their run blocking has been just as good. Their power rushing success rate is 100% and has a stuff rate of only 8%. Both stats are tops in the NFL giving the reason for Hendrickson to sit on your bench this week.

Matchup: New Orleans Saints (Give up the 6th fewest points to defensive ends)

Demarcus Lawrence is not getting off to a great start to 2019. Lawrence has been one of the best tackle producing defensive ends in football. He averaged almost four tackles a game over the past two seasons. He has four total this season in the first three games. Lawrence also averaged just under one tackle for a loss per game, he currently has one through three games. I am not saying sell Lawrence by any means but he is a sit against bad matchups for me right now.

He is facing off against one of the better offensive lines in the NFL. Lawrence is a pass-rushing specialist and the Saints have the 6th best offensive line in pass protection and have given up only three sacks all season. Even with Teddy Bridgewater at the helm, the line is holding up giving up only two sacks in 57 dropbacks. Lawrence is still a stud but is a sit for me this week.

Michael Brockers – Los Angeles Rams 2019 Stats: 11 tackles (seven solo), one tackle for a loss, one sack and one QB hit.

Matchup: Tampa Bay Buccaneers (Give up the 9th fewest points to defensive ends)

Michael Brockers has been very productive as a run stopper for the Rams the past few seasons. The past two seasons he has averaged 54.5 tackles per season and is on pace to beat that right now. The one thing that Brockers does not do well is rush the passer. He has only been able to accumulate 21 sacks in 110 career games.

The Buccaneers are bad in pass protection having given up 10 sacks in three games this season. This still does not change Brockers’ fantasy projection much. His teammate Aaron Donald should eat up all the sack production. Brockers scores in run-stuffing tackles but opposing defensive ends only have three solo tackles and three assisted tackles in three games against the Buccaneers. I do not expect much out of Brockers this week.

Taco Charlton – Miami Dolphins 2019 Stats: Two tackles (one solo), one tackle for a loss, one sack and one QB hit.

Matchup: Los Angeles Chargers (Give up the 5th most points to defensive ends)

Taco Charlton has been labeled a bust by most after his lackluster career since being drafted in the first round by the Dallas Cowboys. The Cowboys waived Charlton and Miami jumped in and picked him up. This was a very smart move for the Dolphins considering they were able to grab a 25-year-old first-round talent for next to nothing. Sometimes it just takes a change of scenery for players to figure it out. The Dolphins have nothing to lose this year by playing him heavy snaps.

Charlton came in the first week he was with Miami and played 42% of the team’s defensive snaps. He was able to come up with two tackles, one for a loss and a sack against his former squad and also the best offensive line in the league. In week four he gets the Chargers who have given up 10 sacks already this season. The Dolphins released Tank Carradine after week three proving that Charlton will be starting with the Dolphins. Role him out as a nice boom or bust option and the potential to live up to his hype.

Vic Beasley, Melvin Ingram, and Stephon Tuitt all have top 10 matchups this week. Beasley is on a self-proclaimed comeback tour trying to reach his former level. Ingram has been steady and has a great matchup against the horrific Dolphins. Tuitt is continuing his breakout campaign against the Bengals who can’t stop anybody. All of these guys are starts this week.

Trey Hendrickson is enjoying a breakout campaign himself but gets the best offensive line in football. Demarcus Lawrence has been very slow to start. He gets the Saints who have given up only three sacks all season. Leave them on your bench. Taco Charlton has a new team, a rejuvenated career and plays the Chargers who give up serious points to defensive ends. He is a nice sleeper to push out this week.

Follow me on Twitter @JoeyTheToothIDP. Tune into the IDPGuys weekly podcast for the most up to date info to help you win your leagues. Be sure to visit our sister site www.dynastyfootballdigest.com for anything you need to know dynasty football related. For all of my IDPGuys articles visit here. For all of my Dynasty Football Digest articles visit here. Remember…the Tooth has the taste for IDP. With @OrangeMan3142, @IDP_Dude, myself and the rest of the @IDPGUYS, there is nothing in the IDP world we haven’t covered. 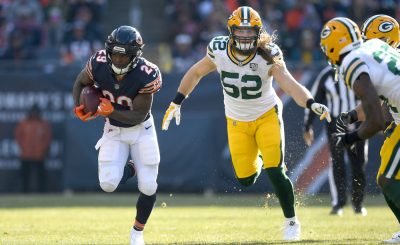