Running back Duke Johnson of the Cleveland Browns is a value pick that could help your fantasy football team, he’s severely undervalued but should perform well.

Some people love big hitters like Jerrick McKinnon, or exciting new toys like Saquon Barkley. While those are fun, I’m a fantasy player who has built his empire on value. Spending a flier pick on Antonio Brown in 2010, and grabbing Devonta Freeman off the waivers in 2015 are the moments that I play fantasy for.

Now, before I begin to dive into this running back that I very much like, let us first discuss a wide receiver that I endlessly love, Larry Fitzgerald. Fitz has been a fascination of mine for a bit of time now. He consistently produces, is loved by teammates, and seems to give back to his community a great deal. He leaves an impact on the field and on the people around him.

“So is this just a love letter to Larry legend?” I hear you cry. And to answer, no, this is not. But Fitz is the perfect embodiment of the argument that needs to made for this running back that I have grown so fond of. That running back is Duke Johnson, and he is under appreciated.

For the last three years Fitz has been labeled as overdue for a production plunge. This is reflected in his ADP, as in 2015 he was the 29th wide receiver off of the board in redraft leagues. He went on to finish the year off as the 8th overall receiver in PPR leagues. In 2016 the trend continued, as he was once again taken as the 29th wide receiver yet finished 11th overall. I am sure you can guess how last season went by now right? The point of bringing Fitz into this is that he is the perfect example of a player that will not be bound by their ADP.

Well Duke Johnson is another one of those players. Though he somewhat burst out onto the scene last season, Johnson has actually been one of the most productive pass catching backs in the league, being among the top five for receiving yards in every year he has played. Over his three year career Johnson has displayed extremely reliable hands, touting a 78% catch percentage. He also has shown an ability to succeed as a runner averaging 4.3 yards per carry over his time in the league. As a whole, Johnson is an efficient back who particularly succeeds in the passing game. 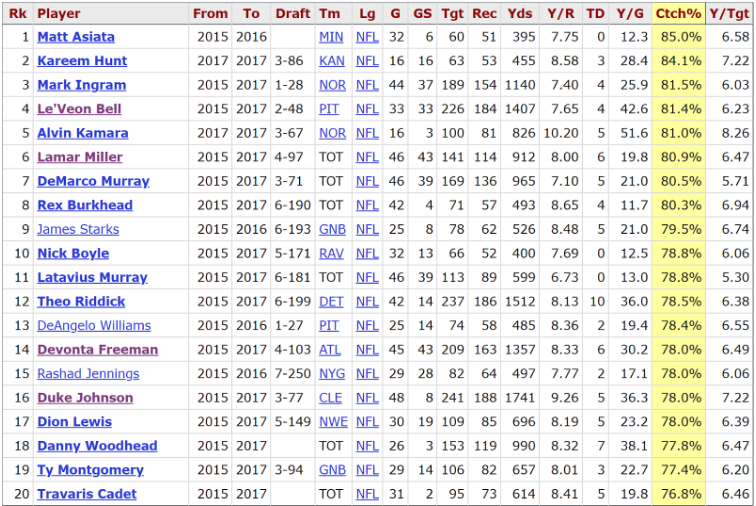 As I said, Johnson somewhat burst out onto the scene last season. He finished as the 14th overall running back for the season in half-point PPR leagues, however, he was taken as the 33rd back off the board on average. Players that went ahead of him include Terrance West and Ameer Abdullah. Ok, that is not fair though, because he had not shown the ability to be a consistently startable running back before this point. He had flashed in games the two seasons prior, but nothing had shown that he was worth picking highly.

Well here comes the best part, his ADP this year is almost identical. He is currently being taken as the 36th running back on average. Players such as Lamar Miller and Marlon Mack are being taken before him. Johnson is being taken at roughly the same spot he was before, except now he is a highly paid pass catching back with the man who designed the Le’Veon Bell fueled Steeler’s offense as his new coordinator.

This may stem from the growing fear that the draft selection of Nick Chubb and signing of Carlos Hyde will eat into Johnson’s role, but a closer look at the stats will tell you that neither back is really capable of fulfilling it. First Chubb, his use in college as a pass catcher was virtually non-existent. He caught four passes his junior year and only 31 his entire college career. Though a talented runner, he just is not capable of being utilized the same way Johnson is.

Hyde is facing similar issues. His utilization in the passing game was extremely limited up until last season. When he did get the opportunity to show off his abilities he did not show much, averaging less than six yards a reception and a sub-70% catch rate.

So with everything on the table, should you take Duke Johnson in a redraft or dynasty league? For his current price, yes. Johnson is capable of offering top 24 running back numbers while his ADP is that of a back that is not startable. In redraft leagues he is going next to guys like Courtland Sutton and Blake Martinez, and the choice between Johnson and those two is a no brainer. Take Duke and enjoy the feeling of stealing an awesome asset for the price of a player who will ride the bench.

Thanks for reading this article by writer Asher Wenrich (@AsherWenrichNFL), check out him and the other writers at www.IDPGuys.org!

Hi everyone! My name is Asher Wenrich and I love fantasy football. Funny enough, I actually was not a huge fan of football in general before I started playing fantasy, but after that, I was hooked. I am a math major at a university in Southern California, and thanks to the great people at IDPGuys.org I get to spend my free time writing about the hobby that I so love. I hope you all enjoy the content that I am able to contribute here and I am looking forward to connecting with all of you over Twitter!