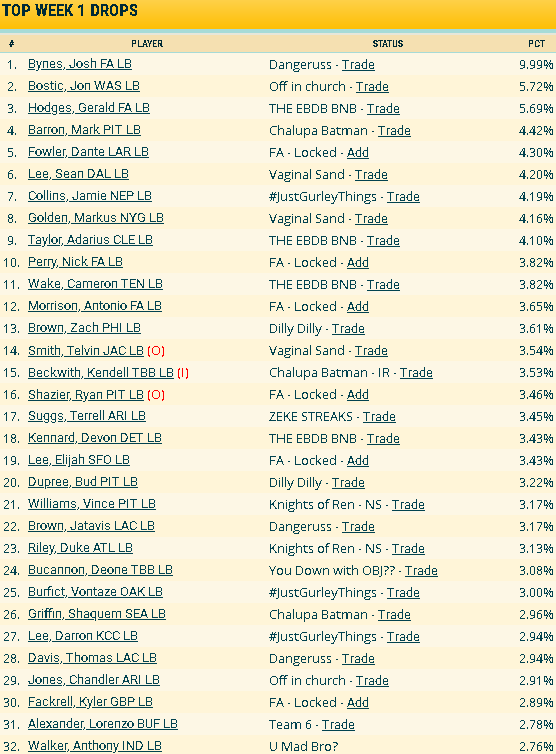 My Fantasy League Linebackers Who Shouldn’t Be Dropped, But Added Going Into 2019.

Each month I’m going to review the top adds/drops, from each defensive position, on MFL’s site. Also included will be my recommendations on if these players should be added or dropped to your roster. This article will be covering the top drops at linebacker and which of these players you should pickup.

I assume that he was being dropped before he signed with the Washington Redskins. He’s penciled in as the starting middle linebacker on this defense. MFL has Bostic’s 2019 projection at 53 tackles, 30 assists, and 3 sacks. Jon currently sits at a 5.72 percent drop rate. I expect this to change to a positive add rate very quickly, given the opportunity he has in front of him.

He’s the projected starter at Will linebacker, for the Rams defense. MFL has Fowler’s 2019 projection at 26 tackles, 12 assists, 2 forced fumbles, 2 fumble recoveries, and 3 sacks. I understand why some owners are cutting bait on him, but I think he could be a nice bye week/depth guy to have on your roster. Fowler currently sits at a 4.30 percent drop rate and I think it will continue to fluctuate depending on owner preference.

He’s coming off of a down season with Arizona, a year ago, as he struggled in his return from a torn ACL injury, in 2017. However, Golden is fully healthy and reunited with his old defensive coordinator, with the Cardinals, James Bettcher. The Giants signed him to a one year contract. Golden is penciled in as the Giants starting weak side linebacker, on a defense that’s in need of play makers. MFL has his 2019 projection at 24 tackles, 13 assists, and 3 sacks. Golden currently sits at a 4.16 percent drop rate and I’m hoping this decreases some, as he’s a player that i’ll be adding late in drafts.

He, like Jon Bostic, is someone that I assume was being dropped before he signed with the Philadelphia Eagles. He’s penciled in as the starting middle linebacker, on this defense. Brown is replacing Jordan Hicks, who signed with Arizona in the off season. MFL has Brown’s 2019 projection at 70 tackles, 10 tackles for loss, 31 assists, 2 forced fumbles, 1 sack, and 1 pass deflection. Another reason why i’ll be looking to add him is because he graded out as Pro Football Focus’s number 3 off the ball linebacker, behind only Kuechly, and Wagner. Brown currently sits at a 3.61 percent drop rate. I’m expecting this to change to a positive add rate very soon, now that he has found a new home and starting job with the Eagles.

For various different reasons I understand why these players are ones owners cut bait on. However, all of these players mentioned, I feel can help make an impact to your fantasy team, this season. Ranking the add order of these players would be Zach Brown, Jon Bostic, Markus Golden, and Dante Fowler. Getting solid production from your linebackers could be the difference in the success or failure of your season. Please keep an eye out for the top adds for corner backs.