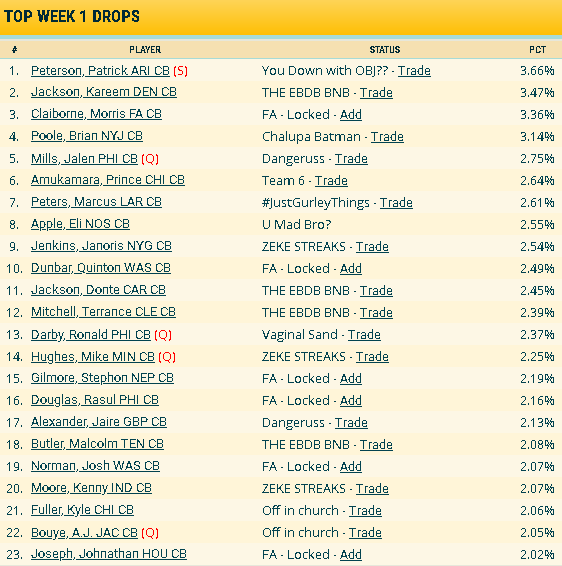 My Fantasy League Cornerbacks Who Are Being Dropped That You Should Add, Going Into 2019.

Each month I’m going to review the top adds/drops, from each defensive position, on MFL’s site. Also included will be my recommendations on if these players should be added or dropped to your roster. This article will be covering the MFL top drops for cornerbacks. Currently, there aren’t any cornerbacks being added that meet the two percent add rate for MFL’s site.

Patrick Peterson will miss the first six games of 2019 for violating the league’s PED policy and will be targeting a week 7 return against the New York Giants. MFL has Peterson’s 2019 projection at 33 tackles, 5 assists, 1 forced fumble, 1 fumble recovery, and 1 interception. Patrick currently sits at a three point six six percent drop rate and I do expect this to increase as the season gets closer. Upon Peterson’s return he could be facing either Eli Manning or Daniel Jones as the Giants QB. I also think that teams will be throwing at Peterson to see what shape he’s in and how effective he will be. That presents lots of opportunity for him to make plays, thus helping your weekly scoring match up.

Kareem Jackson is expected to play a mix between corner and safety for the Broncos defense, due to his versatility. He should play safety in their base defense and switch to slot, in their nickle defense. MFL has Jackson’s 2019 projections at 71 tackles, 14 assists, 1 forced fumble, 1 fumble recovery, 5 interceptions, and 1 sack. Jackson currently sits at a three point four seven percent drop rate, which I expect to decrease once people see how he’s going to be used. Due to Jackson now playing in the AFC West, he should get plenty of chances to make plays. Given how much those opposing qbs should be throwing, that’s a huge plus for Jackson.

Poole will be filling the spot left by Buster Skrine, who signed a three-year contract with the Chicago Bears. Last season, Buster put up 52 tackles, 4 tackles for loss, 6 assists, 1 forced fumble, 1 fumble recovery, a half a sack, and 8 pass deflections, over 14 starts. MFL has Brian’s 2019 projection at 55 tackles, 15 assists, 1 forced fumble, 1 fumble recovery, 2 interceptions and 1 sack. Poole, currently sits at a three point one four percent drop rate, which I think will continue to increase slightly. However, I think it should be decreasing. Poole has a great opportunity to take this job and run with it, in hopes of getting a long term contract next year. Having  never been a shut down corner and the division he’s in, the AFC East, he should be thrown at a fair amount.  Poole makes a great add, with how much those qbs like to air it out.

He only played in 13 games and started 11 of them, last season, due to injuries. He should be fully healthy and able to play all 16 games for the Green Bay defense this season. MFL has Jaire’s 2019 projection at 63 tackles, 9 assists, 1 interception and 1 sack. Alexander currently sits at a two point one three percent drop rate. I expect that to decrease if he can put together a solid training camp and preseason. Also working in his favor is the lack of experienced depth behind him on the roster. A player who’s going to play a ton is someone that can help you when trying to find a corner you can play weekly. He makes for a great under the radar add.

He just signed a four-year extension with the Colts, making him the highest paid slot corner in the league. This contract extension was due in large part to the huge season he had, as a second year pro. MFL has Moore’s 2019 projection at 69 tackles, 17 assists, 2 forced fumbles, 3 interceptions, and 2 sacks. Kenny, currently sits at a two point zero seven drop rate, which I expect to decrease as the season approaches. With Moore’s spot locked down he should be getting as much playing time as he can handle. With how competitive the AFC South was last year, everyone but the jags being over .500, I expect much of the same in 2019. I believe that teams will want to see if Moore can back up his strong play from a year ago, thus increasing his chances at making plays weekly.

Due to many owners dumping these guys, now is a great time to add them to your roster and enjoy the treasure your league owners discarded. Finding that corner everyone is overlooking or dropping could play a big part in you winning your weekly match ups. The key to being a valuable corner owners can rely on weekly is playing time that will hopefully translate into increased opportunities to fill the stat sheet. Ranking the add order of the players mentioned would be Kareem Jackson, Kenny Moore, Jaire Alexander, and Brian Poole. Please keep an eye out for the top adds at safety.