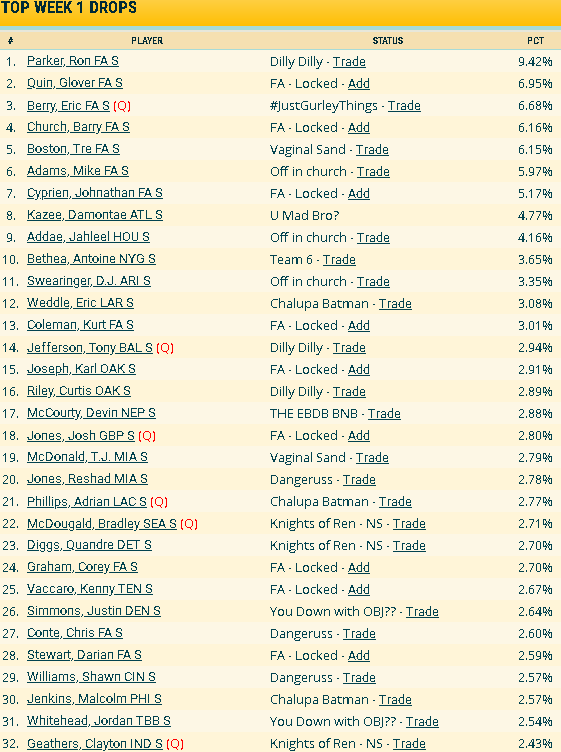 My Fantasy League Safety Targets Who Should Be Added That Other Owners Are Dropping, Going Into 2019.

Each month I’m going to review the top adds/drops, from each defensive position on MFL’s site. Also included will be my recommendations on if these players should be added or dropped to your roster. This article will be covering the MFL top drops at safety.

According to Atlanta Falcons head coach, Dan Quinn, Damontae Kazee could move to slot corner, this season. With the Falcons losing Brian Poole in free agency, Kazee has a great chance to fill that starting job across from Desmond Trufant. MFL has Damontae’s 2019 projection at 54 tackles, 19 assists, and 6 interceptions. Currently, Kazee sits at a four point seven seven percent drop rate, but that should decrease if he can win the starting cornerback job.

With a full off-season in Arizona, building their defensive chemistry, he’s penciled in as the starting free safety with Budda Baker as the strong safety. MFL has D.J.’s 2019 projection at 66 tackles, 12 assists, 2 forced fumbles, 1 interception, and 2 sacks. Currently, Swearinger sits at a three point three five percent drop rate. Due to his opportunity for playing time, this should decrease his drop rate in no time. I’ve always loved his style of play and I think that will go great with what they are trying to build, defensively, in the desert.

Coming off of a career season, he’s hoping to back that up with another solid season, making him a more consistent player. MFL has Shawn’s 2019 projection at 70 tackles, 25 assists, 1 forced fumble, 1 fumble recovery, and 3 interceptions. Currently, Williams sits at a two point five seven percent drop rate. I like him to build off last season’s career year and he’s someone that I’d have no problem starting week to week. Hopefully more owners will catch on and start to turn his drop rate into a positive one.

As you can see, owners drop players for many different reasons and the more under the radar type players you can add off waivers, the better. Ranking the add order of the players mentioned would be Antoine Bethea, Shawn Williams, D.J. Swearinger, and Damontae Kazee. I’m so confident that I can find quality talent on the waiver wires that I didn’t draft a single secondary player in any rookie draft, this year. As I’m sure you’re all aware, the players with the greatest opportunity at playing time are usually the ones dynasty owners like to target, to help their team win games. I hope you find these types of articles helpful, as the season approaches.