Lorenzo Carter was one of the better edge rushing prospects in the 2018 Draft. After one season of fairly good production, he could be in line for a larger role

Lorenzo Carter was drafted in the third round, number 66 overall, in the 2018 draft. He landed in a really good situation in New York with the Giants as they were in need of edge rushing with Jason Pierre-Paul having been gone to the Buccaneers. Landing Carter in the third must have had the Giants salivating considering some had Carter as a second round talent.

He played in 15 games this season missing only one due to injury and starting two of them. As the season progressed he starting to see his role with the team increase and his total snap percentage increased. Carter is 6’5″ and 250lbs. and ran a 4.50-second 40-yard dash. To boot he had a 36″ vertical. His athletic measurables are very impressive. With a full offseason with the team, he could see his role grow for 2019.

Carter was a part-time player for the Giants in 2018. He played a total 40.3% of all the teams defensive snaps. Having played less than 50% of snaps he still produced at a rock-solid level. Carter finished the season with 43 tackles (30 solo), seven tackles for a loss, four sacks, four passes defended and 10 QB hits.

Arguably his best game came against the 49ers in week 10. During that game he seven tackles (six solo), three tackles for a loss, and a QB hit. Seven tackles from an outside linebacker position is great production. Carter only played 45% of snaps in that game and still came up with the large tackle total.

During week 17 he saw his final snap count reach just under 60% of the teams snaps. During that game, he totaled three tackles, one for a loss, one sack, one pass defensed, and a QB hit. Overall it was a productive season as Carter played very well in both pass coverage and run defense achieving an overall above average grade of 65.8 by Pro Football Focus. If Carter had just a little more strength to his frame he would have a larger role with the team.

Lorenzo Carter has some unbelievable athleticism for his size. He combines speed and strength that help him in his pass rush moves. During the draft combine last season he really showed out which is why I was quite surprised to see him land in the third round. With a 40-yard dash time of under 4.50 seconds, faster than a lot of running backs, his burst is scary:

Another thing Carter uses to his advantage is his long wingspan. Carter has a huge 82 inch wingspan. He uses this wingspan when rushing the passer. His favorite move seems to be very simple, get your hands on the lineman first. When the play starts Carter gets his hands into the chest of the offensive lineman forcing the lineman off balance allowing for Carter to use other moves like his bend. At the top of the line here you see Carter get his hands on the lineman and ducks and bends around him for his first career sack:

Here is an example of him keeping the lineman off balance putting his hand in the center of the lineman’s chest making for an easy route to the QB:

I was a huge fan of Lorenzo Carter pre-draft. The Giants are using him perfectly. Rushing the QB and using his length was one of his biggest strengths and he’s thriving. https://t.co/hjDUCfyInd

Carter also uses his large wingspan to bat balls at the line. Watch here as he bats away the QB pass, notice the length of his reach:

Better Playmaker Than You Think

Lorenzo Carter has been compared to many of the top edge rushers from this years draft. Unfortunately for him, guys like Harold Landry, Marcus Davenport, and Bradley Chubb have gotten all the attention. Landry and Lorenzo Carter seem to be the only edge rushers who have been getting it done in coverage as well though. During his great week 10 against the 49ers Carter also played great in coverage:

Usually people don't praise edge defenders for their coverage ability, but Giants rookie Lorenzo Carter had himself a day against the 49ers. His 88.5 coverage grade on Monday Night was the highest coverage grade of any ED targeted at least twice in Week 10.#GiantsPride pic.twitter.com/PkL8TM1uym

Landry is considered as one of the top edge rushers from this draft. Carter himself does not get any credit except for inside his organization. If you take a closer look into the playmaking stats of them a little closer you may be surprised. This season, we at IDPGuys have endorsed the revolutionary PAPS charts, created by The IDP Tipster himself @Hbogart27. The charts show a players play making ability based off of how many tackles and plays they make compared to their time on the field. Here I compared three players, the results are surprising: 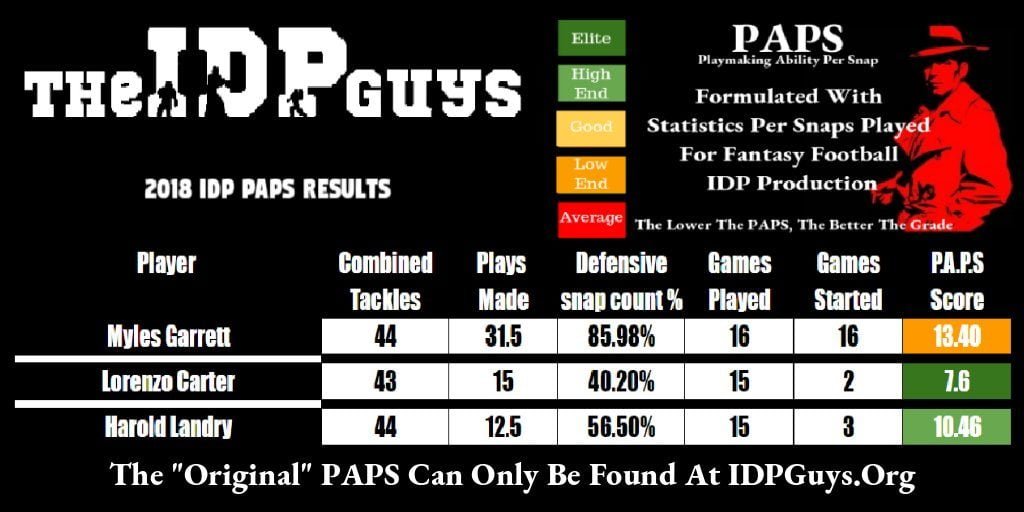 Based on the PAPS scores of the three, Carter is actually to best playmaker. That is being compared to the likes of highly touted pass rusher Myles Garrett who may have doubled the amount of plays made (tackles for a loss, sacks, passes defensed, interceptions, forced fumbles, fumble recoveries) than Carter but also more than doubled his snap count. To boot Carter only had one less tackle than Garrett while starting in 14 less games and playing in 45% less of his teams defensive snaps.

When comparing Carter to Harold Landry, Carter still only had one less tackle but played in 16.3% less of his teams snaps. Also, even though he played in less of his team’s snaps he still made more plays than Landry 15 to 12.5. Carter’s name may not be as flashy as some of the other guys in the league but his playmaking ability is up there with the elite edge rushers.

If there is one thing that Carter needs to improve on to be an every down player in the NFL is his size. If Carter can hit the weight room and pack on a couple extra pounds of muscle to his frame, we could be looking at a possible elite outside linebacker for the Giants. They may have found themselves a gem in the third round and with his tackle numbers to go along with his play making numbers, he is worth a look to at least stash on your IDP rosters. 2019 has the makings of becoming a breakout year for Lorenzo Carter.

Don’t forget to follow me on Twitter @JoeyTheToothIDP, @IDPGuys, and @NoBSidp. Also, tune in to the weekly IDPGuys podcast for the most up to date info to help you win your fantasy football leagues. Coming in March you can also watch our new podcast, The No BS IDP Content Podcast starring the Scott Fish Bowl Winner himself @FFstompy, The IDP Tipster himself @Hbogart27, and myself. Check out the PAPS Database created by The IDP Tipster on our site as well. Remember… The Tooth has the taste for IDP.