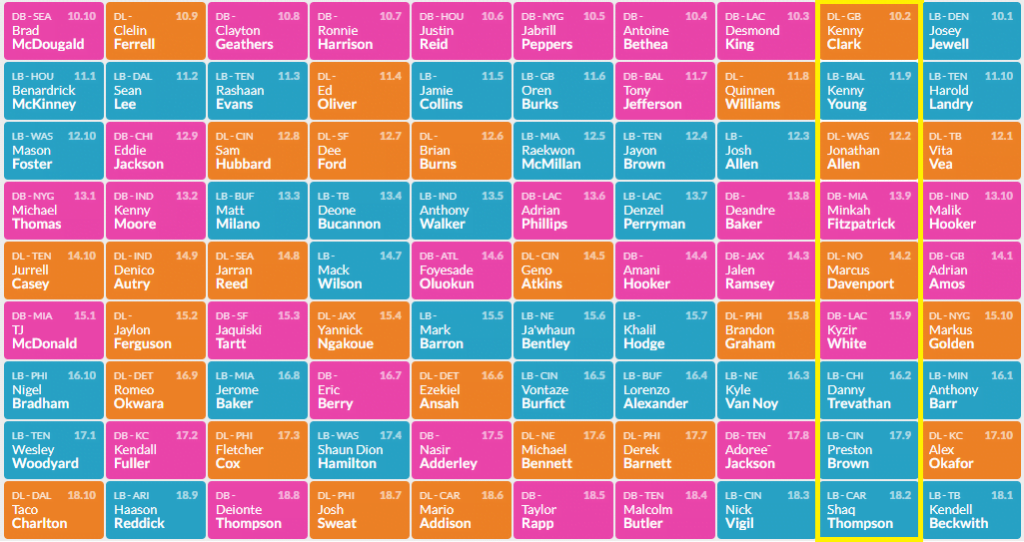 Continuing with my IDP mock draft series, I’m picking up where I left off in part 1 where I discussed my picks in rounds 1-9. In rounds 10-18 I will continue to discuss the reasoning behind each of my picks. As in any draft, it’s easy to grab some rankings and work your way down the list. For this, I wanted to dig a little deeper to explain why or perhaps why I didn’t draft a certain player. I hope you find this useful and maybe it will introduce you to a new draft philosophy that helps your roster overall.

Current roster through the first 9 rounds heading into the 10th.

There is a lot to love about Clark, especially in round ten. He finished the year as the overall 22nd overall DL in IDP leagues despite playing only 12 full games in 2018. Clark was on pace to finish 7th overall amongst DL in FP/G  before suffering an elbow injury which eventually landed him on the IR missing the last three games of the season. One of the more dominant interior linemen in the NFL and still just 23 years old, I expect more of the same from a healthy Clark in 2019.

#Packers DT Kenny Clark… 3rd most snaps on defense this season. Always showing up on film… Now starting to add up in the stat sheet!

Apparently, I wanted another Kenny on my team in this IDP mock draft. With 109 players off the board, I was looking for some linebacker depth and Young jumped out to me as the most “he could be great” linebacker on the board. With C.J. Mosley gone, Young steps into a promising role to help fill the void. At this point in the draft, I was willing to take my shot with Young instead of other linebackers like Benardrick McKinney, Jayon Brown, Rashaan Evans and Oren Burks. It’s not that I don’t like those guys, I just think Young has the opportunity to outproduce them by a tier and be a viable every week started in IDP lineups.

With C.J. Mosley out, Patrick Onwuasor and Kenny Young played pivotal roles in the victory over the Broncos.
📰: https://t.co/RFlxrMeuUG pic.twitter.com/sPtOQ97L8P

Allen was in my top 20 articles and I don’t see him falling out in 2019. After bouncing back from an injury-filled rookie year in 2017, he was pretty much everything you want in a pass rusher and could potentially see a lot of time on the field with the Redskins struggling offense. He’s good enough to be a DL2 in most IDP leagues so the value here at pick 112 and have him as my DL4 is a steal.

Tomorrow I'll be looking at Jonathan Allen's development in his rookie season with the #Redskins. I think 2019 will be a HUGE year for him!

This move was purely a dynasty grab as the situation is still cloudy in Miami with T.J. McDonald and Reshad Jones on the roster. Fitzpatrick is a gifted playmaker who is just waiting for his opportunity to make things happen on the field. I’m willing to take a grab and stash in round 13 when all your doing now is searching for high upside depth and sleepers!

Minkah Fitzpatrick takes it back for six!

Selected 14th overall in the 2018 draft, Davenport had to compete for playing time but, with Okafor gone, I love his opportunity opposite Cameron Jordan. There is a reason the Saints moved up in the draft to snag him, and he’ll get to showcase that reason in 2019. Love this pick in the 14th round.

Marcus Davenport getting in on the fun with another sack! #NOvsMIN pic.twitter.com/fE9KN159JO

White was off to a pretty good start in 2018 before going down with a season-ending injury. He’s been forgotten since the injury occurred so early in the season, but the promise he showed as a safety/linebacker hybrid has me pumped for some more in 2019. It’s unclear at this point how the depth chart will look but there is no reason to doubt White’s ability to produce DB3 numbers or better. I’m also looking at this from a dynasty perspective and White should be one of the building blocks for the Chargers defense for years to come.

Unlike most, I like to grab my sleepers or high upside / low floor players before the last couple of rounds. With those out of the way the next three picks are purely for depth, so let’s breeze through them.

Very consistent above average IDP production from Danny when he’s healthy. You can’t ask for any more than that if your team catches the injury bug or you need to survive a bye week apocalypse.

Vontaze Burfict is gone and the Bengals just signed Brown to a three-year extension and is arguably the best linebacker they have. Another above average IDP producer who can rack up the tackles in the middle of the field when he’s healthy. I like the value of this pick in the 17th round, especially if you look at the other players taken around this pick.

With Thomas Davis finally gone, can Shaq finally seize the moment? Another depth piece for my team for the most part, but there is always that glimmer of hope we’ve expected from Shaq. This is a make-or-break year as Thompson works for a new contract this season and he’ll either ball out or fall out by the end of 2019.

If you liked this article, be on the lookout for more mock draft articles from me and the other dudes here at The IDP Guys throughout the offseason!

The Big 3 IDP Podcast
Looking for an edge in your IDP fantasy football league? Let the Big 3 guide you down the path to a championship! Josh Raymer, Adam Marcum, and Connor Raymer grew up playing fantasy football and have become obsessed with the defensive side of the ball in recent years. The Big 3 IDP Podcast brings a mix of humor, high-quality production values, and quick-hitting IDP analysis you can't find anywhere else. When it comes to IDP, you gotta have the Big 3! Support this podcast: <a href="https://anchor.fm/big3idp/support" rel="payment">https://anchor.fm/big3idp/support</a>
Week 2 Injury Report with Dr. Leezus
by Josh Raymer

In the 2nd episode of The Big 3 Injury Report, Lee Andrews (AKA Dr. Leezus) looks at the most notable names for fantasy on both sides of the ball who appeared on Friday’s injury reports. After looking at who’s already been ruled out, Dr. Leezus discusses who you should play in week 2 and who you should consider benching. For those guys with injuries, what should you expect their fantasy output to be? Dr. Leezus shares his expert medical opinion to help you make those though lineup decisions. Follow Dr. Leezus on Twitter @DrLeezus and follow the show @Big3IDP on Twitter and Instagram, give us a 5 star rating and review on Apple Podcasts, and consider supporting the show over on Anchor. Thanks for listening!