The Jacksonville Jaguars come in with the seventh overall pick in the 2019 NFL draft. 2018 was a complete bust as they had Super Bowl aspirations only to not make the playoffs. Needless to say they have some holes to fill.

I think that it is safe to say that the Blake Bortles experiment has officially failed. I fully expect the Jaguars to go and sign free agent Nick Foles this offseason but that does not mean that They should not try to find a quarterback in the draft as well. Nick Foles as a full-time starter has never panned out. It may have been coach Jeff Fisher‘s fault but only time will tell.

If the Jaguars want to give Foles or their new quarterback a chance then they need to add some protection on the offensive line. The team was ranked 27th in pass protection last season. The Jaguars also need a reliable pass catching tight end. Luckily for them the top four or five in this draft seem to have the ability to be difference makers. There are a couple of spots on defense they need to address but for the most part it is still a high-powered squad so that leaves the focus on offense.

This would be the smartest move for the Jaguars. They need tons of help at the tackle position and Taylor is one of the better prospects in the draft. Some people want the Jaguars to jump right here and grab one of the top quarterbacks but they should stay patient and beef up the line.

Taylor has played both left and right tackle in college for the Gators. We know now that he can play both tackle positions which the Jaguars should be very pleased about. He is very nimble for his size and pulls outside on runs very well. In pass protection he has great balance and footwork to go along with incredibly strong hands that could make him very valuable in the NFL. This is the pick the Jaguars need to make.

As I mentioned earlier the Jaguars are devoid of any talent at the tight end position and need a reliable pass catcher. Here they grab probably the most athletic player at the position. Noah Fant is a freak at the tight end position. He stands at 6’5 and 240 Lbs. and has 4.50 40 yard dash speed. In 30 NCAA games he has just over 1,000 yards receiving and 19 touchdowns.

Fant is not only a move tight end as he is a very good run blocker. This leaves Fant on the field for pretty much every offensive snap and gives the new quarterback, whoever it may be, a big athletic target. Fant should thrive in the NFL and instantly makes the Jaguars a better team.

Here is the pick that should have Jaguars fans at the edge of their seat. Will Grier is a top five quarterback in this draft with great college production. He stands at 6’2 and 223 Lbs. which is not top of the line size but he is not small either. The release point on his throws is very high which helps him in being a little shorter than some.

Grier is a transfer from Florida and has played 22 games with West Virginia. During his time he has totals of 7,354 passing yards at a 65.3% clip with 71 touchdowns to only 20 interceptions. His average yard per attempt is 9.4 yards  which should be enticing to the Jaguars as Blake Bortles career yards per attempt is only 6.2 yards. Grier is not afraid to throw the ball and has much better accuracy than Bortles. Grier could come in and battle soon to be signed Nick Foles for the starting job and could be the future at the Jaguars quarterback position.

If there is one spot on the Jaguars defense that is lacking it may be the safety position. As of right now they employ Ronnie Harrison who is coming off a promising rookie year and veteran Tashaun Gipson who is getting older. Gipson has been effective in his career with three different seasons of at least four interceptions but last year seemed to be on the decline.

Mike Bell is coming off a very good Junior year at Fresno St., for the Bulldogs he totaled 87 tackles (53 solo), 3.5 tackles for a loss, 0.5 sack, eight passes defended, and three interceptions. Bell has the size to play strong safety at 6’3 and 203 Lbs. but also possesses the ball skills to play free safety as he showed with his three interceptions last seasons. Bell would be a great addition to the defense.

The only other point of weakness for the Jaguars defense was the interior of the defensive line. They were playing Malik Jackson but have been said to be shopping him. This leaves Marcel Dareus as the only capable interior lineman on the team. Pair Christmas with Dareus and you have a formidable and large duo in the center. They should not have an issue clogging up the center.

Christmas also has very active hands to go along with being a run stuffer. During his career at Florida St. he was able to come up with 13 passes defended. Big and long-bodied he is hard to throw over when he is stretched out.

Martez Ivey was a five-star recruit and number two overall recruit in the 2015 recruiting class. He played well, just not to the extent some expected. Ivey made second team all SEC for the past two years but is far from a finished product. He works best at zone rushing but is all in all a great selection in the sixth round.

Ivey is a slight liability in pass protection and needs to work on his footwork. That being said he still gets the job done in the run game. The Jaguars showed again last season that they are a run first team but finished in the bottom half of the league in terms of run blocking. Ivey does not have to be rushed right into action and if he does realize his potential and fixes his negative attributes, he could end up being a steal.

Gary Johnson is coming off of a very productive Senior college season. he finished with 90 tackles (61 solo), 16.5 tackles for a loss, 6.5 sacks, one pass defended, two forced fumbles, and a fumble recovery. The Jaguars are a little thin at linebacker outside of standouts Telvin Smith and Myles Jack.

Gary Johnson can come right in and compete for the starting strongside linebacker position. His ability to rush the passer will serve him well here as well as his ability to set the edge and get into the backfield. In the seventh round you are really just looking for value.

The Jaguars come into this draft and grab what seems to be the best offensive tackle in this class as well as his running mate in school and former five-star recruit. Instantly the offensive line gets better which drastically needs to happen for any quarterback to succeed in Jacksonville. With the Jaguars most likely grabbing Nick Foles in free agency they can wait until the third round and grab a top five quarterback in the draft to compete and possibly be the future. Tight end was also a position of need and they arguably drafted the top tight end in the beginning of the second round.

On the defensive side of the ball they grabbed a top five safety, their biggest position of need on that side of the ball. They also grab a big bodied tackle to clog running lanes in the middle. This should be a more balanced Jaguars team in 2019.

Don’t forget to follow me on Twitter @JoeyTheToothIDP and @IDPGuys. Tune in to my 7 Round Mock Draft series as I go through the entire draft to see where each prospect lands. Be ready for 2019 because IDPGuys has a lot in store. Remember…the Tooth has the taste for IDP. 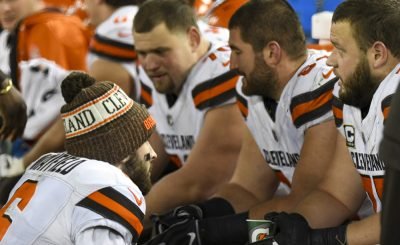 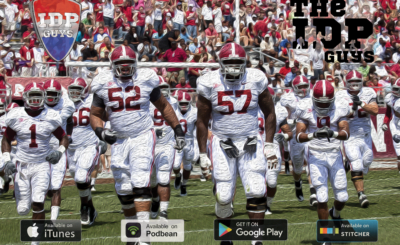