Following Jake Ryan‘s ACL tear that will likely knock him out for the season, IDP players are scrambling to figure out who the replacement might be.  The next question is if their production may warrant a roster spot.

Oren Burks is a third round rookie selected out of Vanderbilt. Oren Burks started his college career as a safety and later converted to linebacker. Because Burks is a rookie and changed positions, he isn’t an instinctual linebacker at this point. He’s also much smaller and weaker than other off-ball linebackers in the NFL. This can cause issues at the point of attack where he is often overwhelmed by larger blockers. However, he is way more athletic than the normal off-ball linebacker and this helps him excel in coverage.

Burks is certainly the most athletically gifted option of the players currently designated as inside linebackers on Green Bay’s roster. The odd thing is the fit into Jake Ryan’s role as an early down thumper. Burks seems to fit better into the “nitro” linebacker role that Morgan Burnett and Josh Jones collectively filled last year. My early assumption of his role when he was drafted and Burnett moved on was that Burks was destined to fill the nitro role early on while being developed into a more complete linebacker. 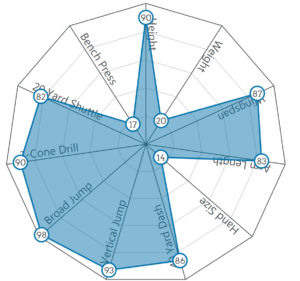 Interestingly, Ahmad Thomas is another converted safety who has flashed in coverage so far in camp. Thomas was an undrafted free agent from Oklahoma that ended the 2017 season on the Packers practice squad. Thomas didn’t quite have the speed and athleticism to stick at the safety position in the NFL. He’s even smaller than Burks at about 6’0″ and 220 lbs. Even at the smaller size he still timed slower in the 40 at 4.7 seconds. Thomas also wasn’t regarded as a physical tackler at Oklahoma, even for a safety. Thomas is currently splitting a lot of first team reps in camp with Burks.

Porter is another undrafted free agent. He’s in his rookie year following his college career at Fairmont State. Porter ran a 4.65 in the 40 and 6.91 in the 3-cone drill at his pro day at 6’0″ and 230 pounds. There hasn’t been much news on Porter.

Martini is yet another undrafted free agent. He is also in his rookie year following his college career at Notre Dame. He stands 6’3″ and 230 pounds but is a limited athlete.  Martini ran a 4.8 second 40. Martini is probably the most instinctual linebacker of the group, he diagnoses well but has limited range. Early reports in camp have also been positive on Martini.

This is an option the Packers have utilized in the past, but it’s tough to see them doing it again. It would probably require a significant step forward from one of the backup edge rushers like Biegel or Fackrell to free up Matthews on the inside on early downs. It’s also risky to move him inside to a more physical position given his recent injury history.

Speculating on free agent additions doesn’t get you very far in fantasy football. But there is more than a fair chance Green Bay will be evaluating their options based on how the young guys look in camp and preseason action. Some notable free agents include Navarro Bowman, Brian Cushing, Gerald Hodges, and Korey Toomer.

Like I said earlier, I believe the Packers plan was to use a run stopper like Ryan on early downs and work in Burks in passing situations. The Packers just don’t seem to have an immediate replacement to fill an early down ILB role. So outside a free agency acquisition or a position change for Matthews, I believe we will see Oren Burks win that second job. He just has a huge advantage based on his athleticism and draft capital the Packers invested in him.

Jake Ryan had 50 solo tackles and 29 assists last year with 1 forced fumble, 1 fumble recovered and 1 sack on 48.19% of the defensive snaps (according to pro-football-reference.com). There will be some variation depending on the scoring system, but this stat line put Ryan in the LB5 range. Assuming whoever wins this competition for the second linebacker spot plays the same role as Ryan, I would predict similar production.

There’s another wrench in this prediction with the change in defensive coordinator and some of the personnel changes. It seems likely that we see less of the safeties filling in at the “nitro” linebacker position and more of the second inside linebacker staying on the field. This could result in a small bump for the winner of this position battle, but I don’t see them being an impact player for fantasy. I think the LB4 level is the realistic projection I’d put on this position for the 2018 season.