2020 is shaping up to be a strange season. If you need to upgrade your IDP, here are some buy-low targets with what you need to give up to get them.

There are some IDP players who are aging slightly, and vastly under-performed for the 2019 season. This, in turn, opens up a nice buy-low window for guys who can potentially be game-changers for your fantasy squads. We teamed up with www.dynastytradecalculator.com providing our IDP ADP values with their killer trade calculator format to form the best trade calculator possible. In this article, I will cover what you will need to give up value-wise to buy some of these cheap impact candidates. Here are the top buy low IDP trade candidates.

Anybody who has been reading any of my articles this off-season knows that I am a big fan of Dee Ford. His value is so low after his disappointing 2019 campaign, but his potential to be a difference-maker was still evident. He played on only 22.3% of defensive snaps and still produced 6.5 sacks and 2 forced fumbles. Ford came up with a sack every 35 snaps he played. Ford is going as low as undrafted in our ADP mock drafts right now, as many analysts are on the other side of the fence for Ford, thinking Ford’s career is virtually over making him one of the top buy-low IDP candidates. Let’s see what you need to give up to acquire Ford.

One Man’s Trash Is Another Man’s Treasure 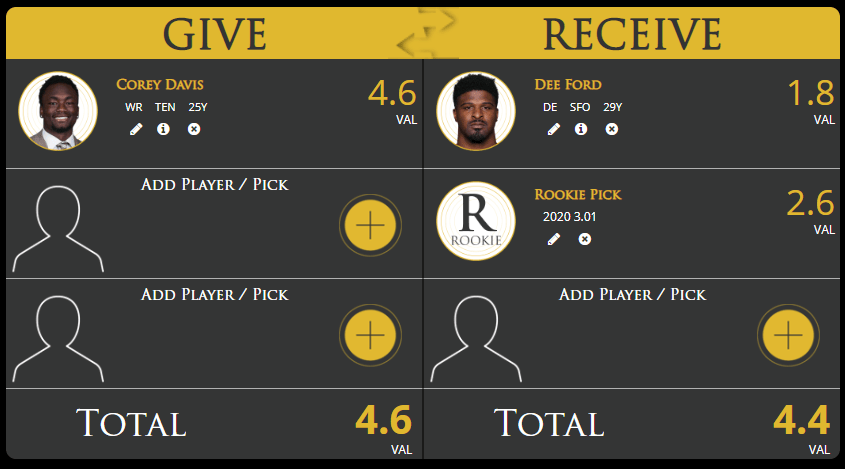 Look at the value here! Fantasy managers are so low on Ford that you can send off perennial fantasy bust Corey Davis and get Ford as well as the rookie 3.01. That rookie pick can be the likes of Bryan Edwards (ADP 25), Kenneth Murray (ADP 27.50), or Jeremy Chinn (ADP 30.75). Would this trade actually go down, maybe. There are Dee Ford truthers who think he still has it, like myself, and there are Corey Davis truthers who have not given up yet. Take advantage of those Corey Davis truthers. 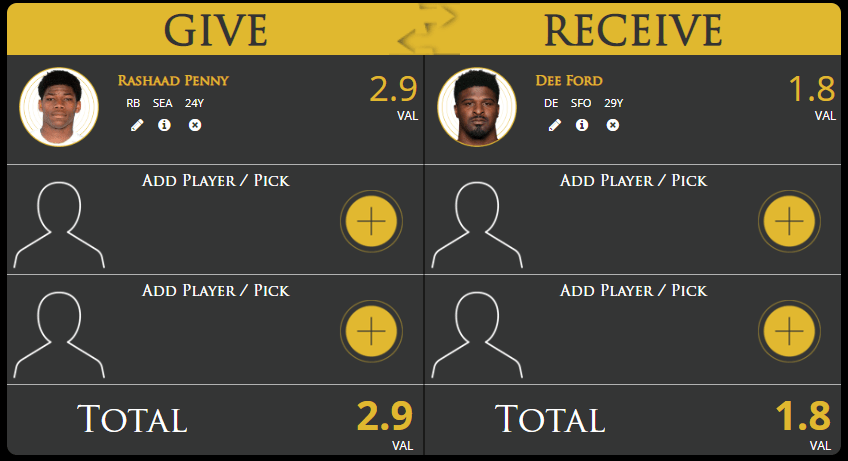 Here you can dump some wasted RB trash and get Ford. Penny is coming off seasons where he came in overweight, could never garner the starting role, and then tore his ACL. The Seahawks then went and drafted Deejay Dallas who will be fighting with Penny for the back-up role. Ford will be a pass-rushing specialist at the least and even if he is limited to 50% snaps, 10 sacks is still achievable. Ford wins this trade as well.

Anthony Walker is quietly one of the most efficient tacklers in the NFL. Playing next to Darius Leonard has overshadowed Walker completely. Yet Walker still finished 10th in the NFL in tackles and he only played on 78.2% of the team’s snaps. Walker ranked right at the top of the league in tackle rate (tackles/total snaps). For reference The top three players in total tackles in the NFL were Blake Martinez, Bobby Wagner and Zach Cunningham. He ranked right up there with the guys at the top in tackle rate as you can see below, yet is being drafted as the LB39! This makes him one of the, if not THE, top buy-low IDP trade candidates. Lets take a look at some trade scenarios.

Give Pennies And Get A Dollar 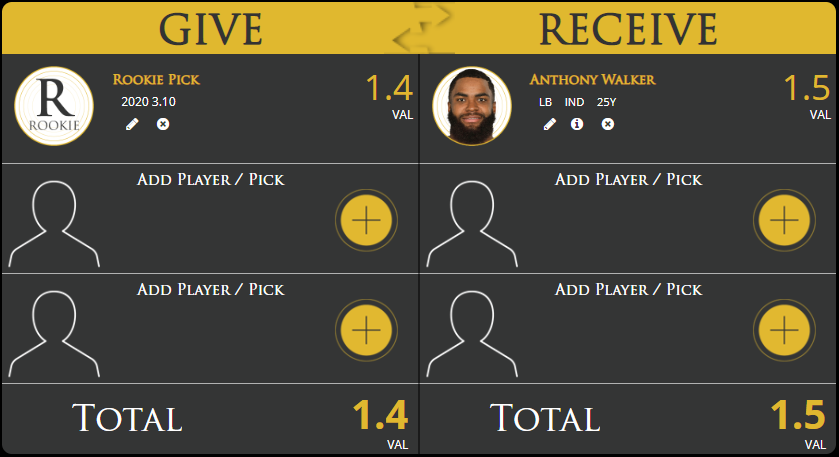 Here, we look at what Anthony Walker is worth in rookie picks. He holds the same value as the rookie 3.10 pick which falls in our ADP as the likes of Chase Claypool, Darrynton Evans and K.J. Hamler. Walker provides you top-10 level tackle numbers and tackling efficiency while the others do not have a clear path to heavy playing time. I am 100% fine with giving up the 3.10 for Walker. 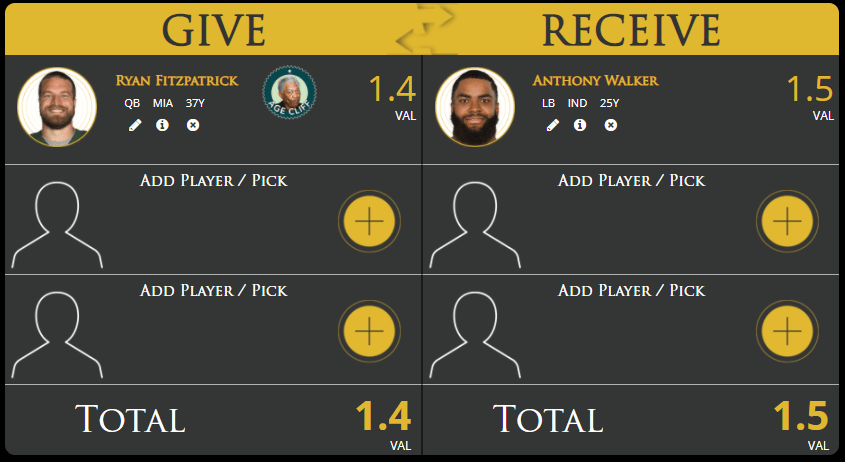 Take advantage of a team in dire need of a “starting” quarterback. The health of Tua Tagovailoa for 2020 is more or less unknown right now. It seems that Fitzpatrick will start the season as the lead QB. Fitzmagic is 37 years old and likely will not be a starter again after this season. You can cash in on the last year of him potentially starting and grabbing a 25 year old starting linebacker who finished 2019 top 10 in total tackles.

Did Darnell Savage have a few bumps in the road in his performance and his role during his rookie season? Of course he did, but to his defense most rookies do. We were all hoping Savage would fill the lineup as the strong safety, especially with his first round pedigree. On the contrary, Savage played most of his time in the slot as a nickel corner but still showed signs of excellent play-making, showcased by his two interceptions and two forced fumbles.

Our own @ZmagsIDP wrote on how Savage is a potential breakout candidate in an article here. I myself wrote an article on the best values as safety based of of their ADP, you can read that here. His ADP is super low right now being drafted as the DB32 (304.75 overall) which is crazy. He is merely drafted as depth which makes him a top buy low IDP trade candidate. Look at these wild trade scenarios. 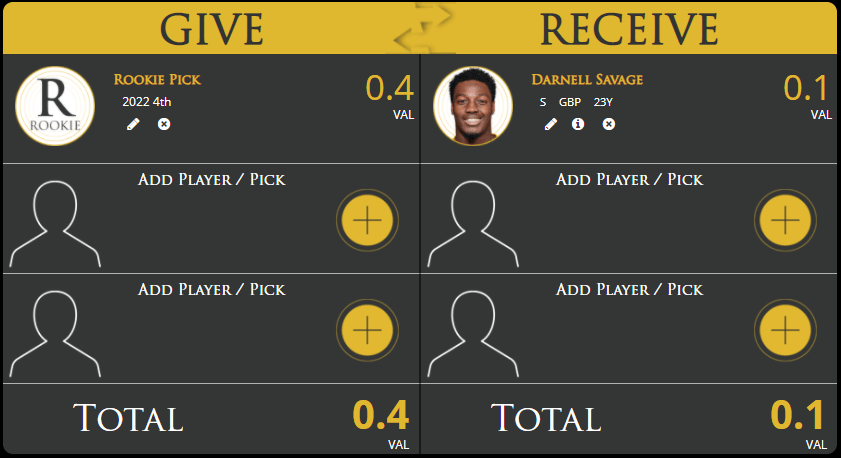 As we all know the value of safeties in the fantasy football market is ridiculously low. Darnell Savage is no different, in fact his value is literally the lowest it could possibly be. Even a 2022 4th has better value than Savage’s current ADP. You probably still need to buck up a little more for Savage but this just shows that you can give up virtually nothing to get Savage.

There are some real low values for some key IDP players for fantasy football. This opens up some great buy-low windows. Dee ford is coming off of an injury-riddled season, though he was still very productive in limited action. Anthony Walker is stuck in the shadow of Darius Leonard, but still was a top 10 tackler in the NFL. Darnell Savage is just completely under the radar even though he showed some real flashes during his rookie season. Be sure to follow the Dynasty Trade Calculator on Twitter at @FFDynastyTrades and try to find some more great values!

Follow me on Twitter @JoeyTheToothIDP and check out all of my written content at idpguys.org and dynastyfootballdigest.com. Be sure to also order our rookie draft guides from each website. For the IDP rookie guide click here. For the Dynasty rookie draft guide click here. Check out and subscribe to dynastytradecalcutor.com and check out IDP trade values. Be sure to check out my new podcast coming soon, The IDP Update with Joey The Tooth.