Patrick Peterson, Darius Slay, and Jalen Ramsey are well-known names, among others, as top-tier cornerbacks. This article goes over players at cornerback that, while still good at the position, play across from those elite talents and get targeted more often and therefore will accrue more fantasy points.

I will not waste anyone’s time listing off these players’ statistics and qualifications. The point of this series is to talk about lesser known or forgotten about players who have been consistently productive in their careers or are poised for a breakout and can be acquired for much cheaper. I wrote about linebackers here, safeties here, defensive ends here, and defensive tackles here. I present to you, the unsung heroes of IDP.

In previous installments of the unsung heroes series, I looked at lesser-known guys that have proven to be consistently productive or were on the verge of a breakout. However, for the cornerback installment, I am going to be looking at something different.

Cornerback, in terms of IDP, is somewhat opposite of the other defensive positions. Most of the elite cornerbacks are bad for fantasy because they aren’t targeted as much and therefore don’t make as many plays.

This article will look at cornerbacks, who are still good at the position, play opposite of elite counterparts. These cornerbacks will be targeted more often, allowing them to rack up stats and fantasy points.

Denver Broncos cornerback Bradley Roby has spent the better part of his career as a nickel cornerback. Though behind Chris Harris Jr. and now Los Angeles Ram Aqib Talib on the depth chart. Roby has been effectively a starter as the Broncos, who play a significant portion of their snaps in the nickel formation, resulting in a 68% snap share in 2017.

In his four seasons, Roby has averaged 12 passes defended, including 17 in 2017. According to PFF, Roby had the lowest catch percentage allowed on contested passes and ranked third in forced incompletions. Averaging over 46 tackles per season, Roby has also been fairly productive in the tackle department. You can see that Roby is a good cornerback in his own right.

Bradley Roby could be ready for a breakout campaign! pic.twitter.com/WgroDCS8ZQ

However, Harris is better. He has been arguably the best cornerback in the slot for almost his entire career. But that’s not all he can do. As a starter, Harris lines up on the outside in the Broncos base defense. He also excels there. From 2012-2016, he gave up the fewest yards per coverage snap at 0.79. Harris was the second least targeted cornerback in 2017. This tells you how dominant he was, despite sharing the field with Talib. 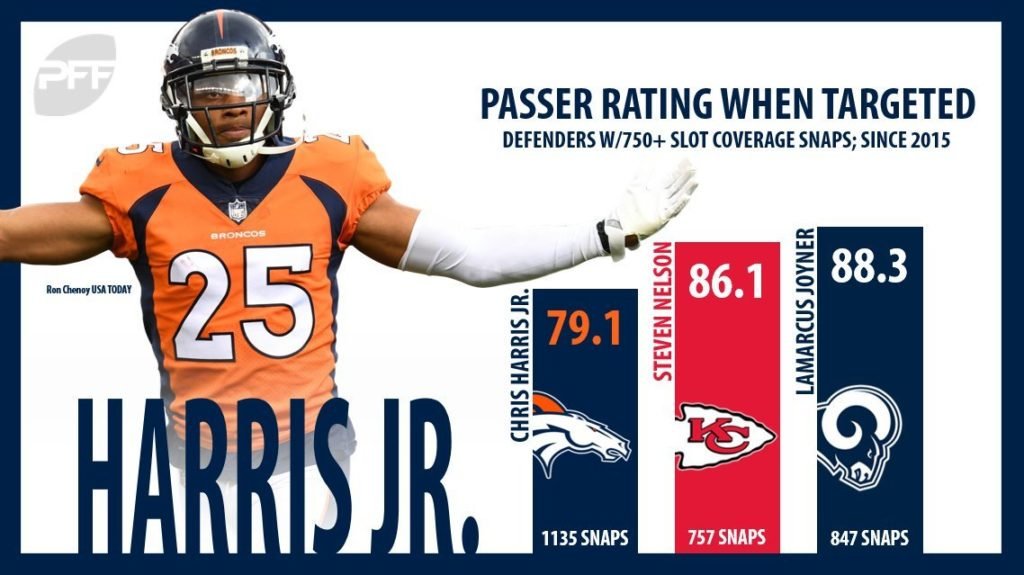 Over the last five NFL seasons, no cornerback has allowed fewer yards per coverage snap than Chris Harris Jr. 🔒 pic.twitter.com/Pv2H0m0MGA

Roby will be starting with Harris in 2018 after the Broncos traded Talib to the Rams for a fifth-round pick in the 2018 draft. Part of the reason for this trade was the Broncos’ belief in Roby. He has shown that he is worthy of being a starter in the NFL. Roby has his shot and the chance to take a step into the elite tier of cornerbacks. Look for Roby to see more targets the seasons lining up across from Harris. Also look for him to rack up fantasy points for your team.

Tennessee Titans cornerback Adoree’ Jackson had a successful rookie season. The Titans and opposing quarterbacks alike put Jackson through a trial by fire. While playing 94% of the defensive snaps, he accumulated 70 tackles and 17 passes defended. Though he didn’t have any interceptions, he did force three fumbles. Jackson struggled out of the gate with a PFF grade of 71.4 in weeks 1-9. However, he ended the season on an upward swing with a grade of 82.3, good for fifth among rookie cornerbacks. 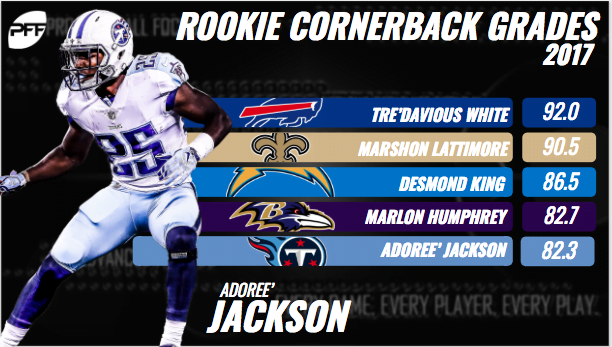 In 2017, Jackson found himself lined up alongside fellow cornerback Logan Ryan. Ryan signed with the Titans in the 2017 offseason after several successful years with the New England Patriots, specifically in the slot. Starting as an outside cornerback for the Titans, however, Ryan had a less than stellar season. According to PFF, Ryan ranked as the 67th cornerback with a grade of 74.3.

In 2018, Ryan will be moving back to the slot, where he has been successful in the past. In the 2018 offseason, the Titans signed Ryan’s former Patriots teammate Malcolm Butler to a five-year, $61M deal. Butler is most well known for two Super Bowl moments: the goal-line interception to seal the win against in the Seahawks in Super Bowl 49 and his benching in Super Bowl 52.

In between those two events, Butler was a good, even great, cornerback. Butler earned PFF grades of 83.2, 88.1, and 79.2. His 2016 grade of 88.1 was a top-five cornerback grade. In those three seasons, Butler has accumulated 43 passes defended and 8 interceptions and averaged 63 tackles.

Malcolm Butler will be a key piece in the Titans' secondary in 2018! pic.twitter.com/TvCfZ5g5hn

The addition of Butler gives the Titans a legitimate cornerback trio. Butler starting on the outside allows Ryan to move to the slot, where he excels. This, in turn, may make Jackson the perceived “worst” cornerback for the Titans in nickel sub-packages. This means that Jackson, a 2018 breakout candidate, could be targeted a lot by opposing offenses. More targets mean more plays for Jackson to make and more fantasy points for your team.

Target Jackson in your IDP drafts.

Some would consider Jacksonville Jaguars cornerback AJ Bouye as top-tier. After all, Bouye finished as the 9th highest-graded cornerback by PFF in 2017. He also earned grades of 88 or higher in back to back regular seasons. 2017 was Bouye’s best statistical season with 6 interceptions, 18 passes defended, and 56 combined tackles. He also finished with the lowest passer rating when targeted in the league. And he didn’t allow a touchdown. 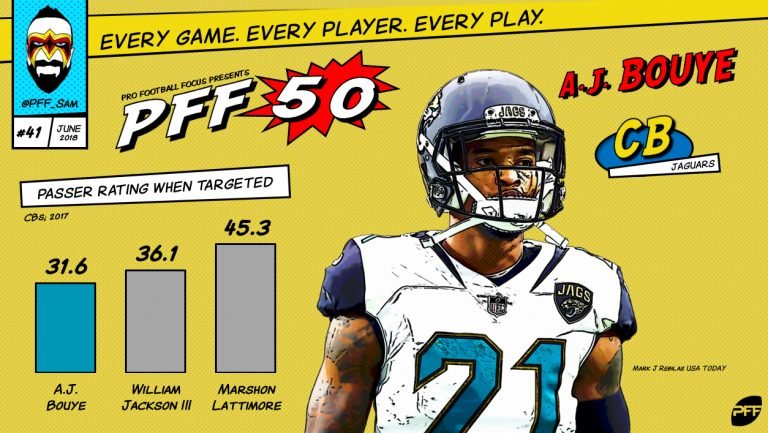 All the talk about the Jaguars pass defense would be centered around Bouye if it weren’t for his teammate Jalen Ramsey. PFF graded Ramsey as the best cornerback in 2017, only his second season in the NFL. Bouye did have better counting stats than Ramsey, who had 4 interceptions, 17 passes defended, and 63 combined tackles. Ramsey is better at run defense, thus his higher tackle numbers and better overall PFF grade. 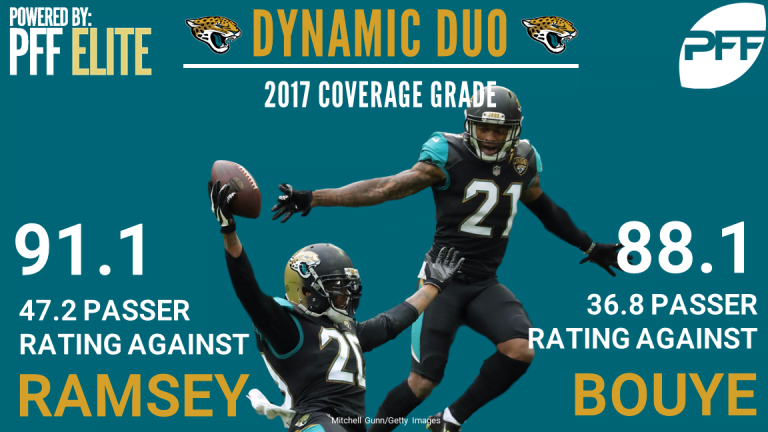 At the end of the day, both Bouye and Ramsey are good cornerbacks to own in IDP fantasy. Both have been able to produce great back to back seasons. Bouye gets the nod over Ramsey because I believe Ramsey is the better of the two entering the 2018 season and Bouye will be targeted more.

As was stated above, more targets equate to more plays and more fantasy points. Bouye is also a playmaker, with double-digit passes defended in three of the last four seasons and 12 interceptions over the past four seasons. Draft Bouye with confidence in your IDP leagues with starting cornerback requirements.

Along with Talib, the Rams also traded for former Chief Marcus Peters this past offseason. Both have been extremely successful in the last few years. However, Peters has been far more prolific in counting stats and fantasy points.

Though Peters saw a down season in 2017 counting stats wise, largely due to only seeing 79 targets thrown his way, he should see an uptick in 2018. Lining up across from Talib will result in Peters being targeted more often, resulting in stats closer to his 2016 and 2017 seasons, when he combined for 46 passes defended, 14 interceptions, and 105 combined tackles.