Ndamukong Suh, Geno Atkins, and Damon Harrison are well-known names, among others, in the IDP community as top-tier defensive tackles. This article goes over players at defensive tackle that are lesser known/forgotten that have been consistently productive or those on the verge of a breakout that can be had later in drafts.

I will not waste anyone’s time listing off these players’ statistics and qualifications. The point of this series is to talk about lesser known or forgotten about players who have been consistently productive in their careers or are poised for a breakout and can be acquired for much cheaper. I wrote about linebackers here, safeties here, and defensive ends here. I present to you, the unsung heroes of IDP.

Defensive tackles are known more for stuffing the run and not pressuring the quarterback. This is why defensive tackles who can both stop the run and generate pressure up the middle are extremely valuable. One of the better pass rush generators at defensive tackle is the Tennessee Titans’ Jurrell Casey. Over his career, Casey has averaged over 5.5 sacks, including a 10.5 sack effort in 2013. He has also averaged 55 combined tackles per season, which tells you he is also good at stopping the run.

Jurrell Casey dominates against the run and as a pass-rusher! pic.twitter.com/9YLC2TQFNb

Consistency has been one of Casey’s best traits. He has only missed two games since 2011. His fewest combined tackles in a season is 44, his most is 68. Casey has also graded out as good or very good according to PFF in every year of his career, including the best grade of his career of 89.7 in 2017. He continually ranks among the top ten of interior defensive linemen (3-4 defensive ends and 4-3 defensive tackles). 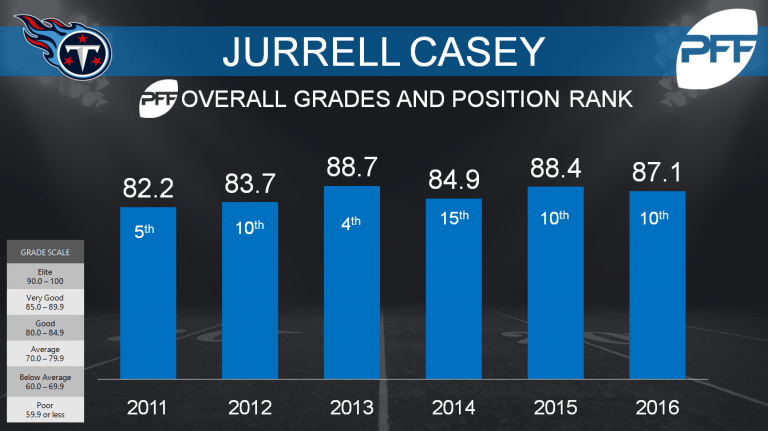 Jacksonville Jaguars Malik Jackson is another defensive tackle, like Casey, who is able to produce pressure up the middle. In his career, Jackson has averaged just under 6 sacks per season, including a career-best 8 sacks in 2017.  PFF ranked Malik Jackson 94th on the top 101 from 2017. According to PFF, Jackson produced 64 total pressures and 9.1 pass-rush productivity, which ranked 10th for interior defensive linemen. Batted passes is another proficient part of Jackson’s pass defense. He has averaged just under 5 passes defended per season.

PFF ranked the Jaguars’ run defense seventh in the league entering 2018. Jackson was included in the top three run defense grades for returning players. PFF’s grading scale tells us that Jackson is above average against the run with a grade of 81.7. While not nearly as prolific as Casey (84.7), Jackson has been decently productive. In his five full seasons, Jackson has averaged 40 tackles per season.

Jackson, however, does have some things working against him. Specifically, the Jaguars’ depth. In the middle of the 2017 season, the Jaguars traded a sixth-round pick to Buffalo Bills for defensive tackle Marcell Dareus. The Jaguars also drafted former Florida Gators defensive tackle, Taven Bryan. This could equate to more rotation, reducing Jackson’s snap count. Jackson’s strength is his pass rushing. So the Jaguars would be best served if they did rotate Jackson out often in order for him to have fresher legs during passing downs and later in games. However, this is not conducive to fantasy productivity.

While Casey is draftable in both separated and combined defensive line leagues, Jackson really is only good for separated defensive line leagues. Jackson has been productive in his career and will continue to be productive, especially in the pass rush. However, with the Jaguars’ depth at defensive tackle, he may see a lower snap count, and ultimately lower tackle production. Pick Jackson as a good later round defensive tackle, but be aware of his limitations.

The Miami Dolphins released now Los Angeles Rams defensive tackle Ndamukong Suh to create salary cap space this offseason. While it is difficult to replace an elite tackle like Suh, Davon Godchaux is a major reason why the Dolphins felt they could move on. Though his 2017 numbers don’t stand out, 40 tackles and 0 sacks, we have to look at the context. Godchaux only played 48% of the defensive snaps. So his productivity was actually very good, especially for a rookie. To put this into perspective, Godchaux made a tackle on 8% of his snaps, Suh on only 5.5% of his, though Suh also had 4.5 sacks

Another way to look at it is playmaking ability per snap (PAPS). PAPS was created by Gary VanDyke (@HBogart27) and is defined as the tackles, interceptions, forced fumbles, fumble recoveries, sacks, etc. per snap played. The lower the score, the better. As you can see, Godchaux has a better PAPS score than elite defensive linemen like Suh and the Los Angeles Rams Aaron Donald, who was ranked PFF’s top player from 2017. 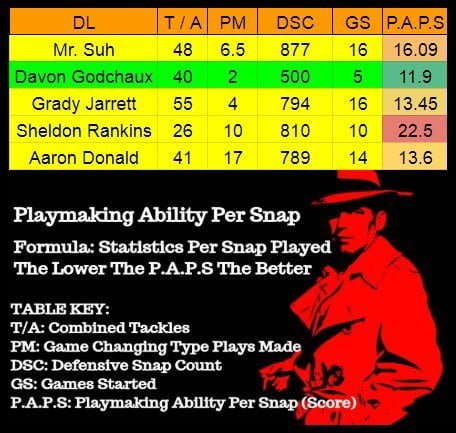 To get a better idea of what Godchaux can do, we have to look at his college production. In his three seasons at LSU, Godchaux combined for 139 tackles, 19 tackles for loss and 12.5 sacks, including 17.5 tackles for loss and 12.5 sacks in his final two seasons. He also showed improvement every season at LSU, according to PFF. His final season was far and away his best, showing he was good against the pass and the run.

The departure of Suh vacated 877 snaps. Godchaux should inherit a significant amount of those snaps as a projected starter. The Dolphins’ offense also seemingly got worse in the offseason with the trade of arguably the best slot receiver in the league in Jarvis Landry. This could equate to more time on the field for the defense and thus, even more, snaps for Godchaux. With an increase in snaps will come an increase in fantasy points. Consider Godchaux in leagues that you need to start defensive tackles.

You can find the unsung heroes at linebacker here, safety here, and defensive end here. Look out for future articles in the unsung heroes series. For more tips and analysis, follow Sam on twitter here. Listen to the guys talk about news, analysis, and strategy on the podcast, and follow the show on twitter @IDPGuys.

The Big 3 IDP Podcast
Looking for an edge in your IDP fantasy football league? Let the Big 3 guide you down the path to a championship! Josh Raymer, Adam Marcum, and Connor Raymer grew up playing fantasy football and have become obsessed with the defensive side of the ball in recent years. The Big 3 IDP Podcast brings a mix of humor, high-quality production values, and quick-hitting IDP analysis you can't find anywhere else. When it comes to IDP, you gotta have the Big 3! Also home to the Injury Report with Dr. Leezus and DF$$$, hosted by Adam and Johny the Greek from IDP Guys. Support this podcast: <a href="https://anchor.fm/big3idp/support" rel="payment">https://anchor.fm/big3idp/support</a>
Second Half Saviors for 2020
by Josh Raymer

SPOOKY SZN IS UPON US! Josh, Adam, and Connor gather in the Sode Shack with a couple new drops to discuss their plans for Halloween with the kiddos. Then they dive into a jam-packed episode: news, waiver wire targets, a new round of Game Fuel and Code Red picks, Who’d Ya Get, and finally, the return of Second Half Saviors. Which under-the-radar guys could save the back half of your fantasy season? That’s what we’re going to find out – so come on in and join us! Shout out to our patrons Jason, Nico, Lorne, and Aaron! Follow the show @Big3IDP on Twitter and Instagram, give us a 5 star rating and review on Apple Podcasts, and consider supporting the show over on Anchor. Thanks for listening!