The 2020 NFL season is approaching and you are looking to capitalize on some overvalued players. We have joined  with www.dynastytradecalculator.com to create the best calculator around.

During this off-season we at idpguys.org and www.dynastytradecalculator.com have collaborated on a trade calculator using their supreme layout with our ADP values to create a trade calculator that includes both offense and IDP values. In this article I will break down some of the best players to sell to maximize your value. Read ahead to see who the top IDP trade values are moving forward in 2020.

There is no doubt that Budda Baker is one of the premier safeties in the NFL. His tackling and ability to make plays downhill is probably the best among all safeties. It is outlandish for a safety to come up with 147 total tackles in a season. For this, I am loading up to sell high on Budda. Not to mention the Cardinals just added tackle hog De’Vondre Campbell and drafted Isaiah Simmons.

The addition of both of those players is bound to eat into the tackle production of Baker. Now if Baker was a ball hawk or was as proficient at blitzing as Jamal Adams this would not be a problem. Unfortunately most of his IDP production comes from tackles. Since his production is bound to drop, selling high now is the best option. Lets look at some possible scenarios.

Get Some Running Back Help 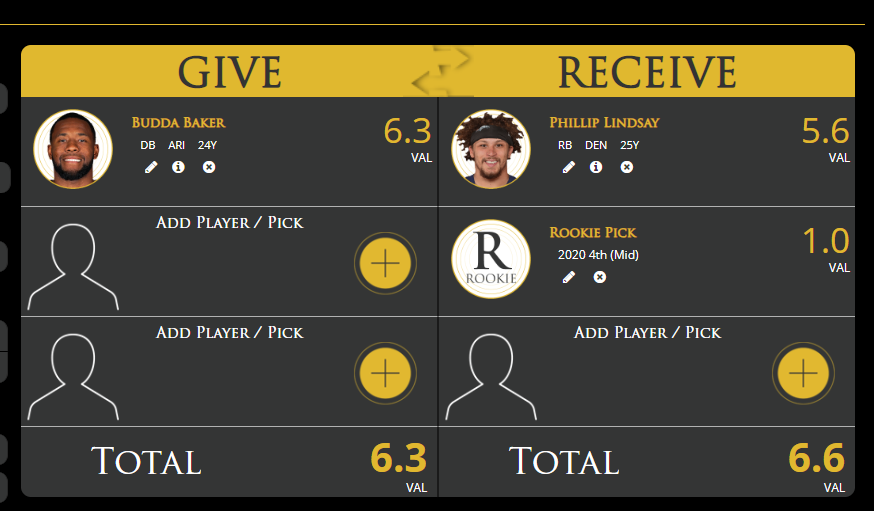 As you can see it is tough to get equal value in offensive players when trading IDP, there is just so much more depth at most IDP positions. Still if you are looking for a running back you could trade straight up for Phillip Lindsay and a mid 4th round rookie pick. Lindsay is in a possible time share or even trade candidate for the Broncos. There is no doubt though, when Lindsay sees the field he is very productive.

Get Some Wide Receiver Help 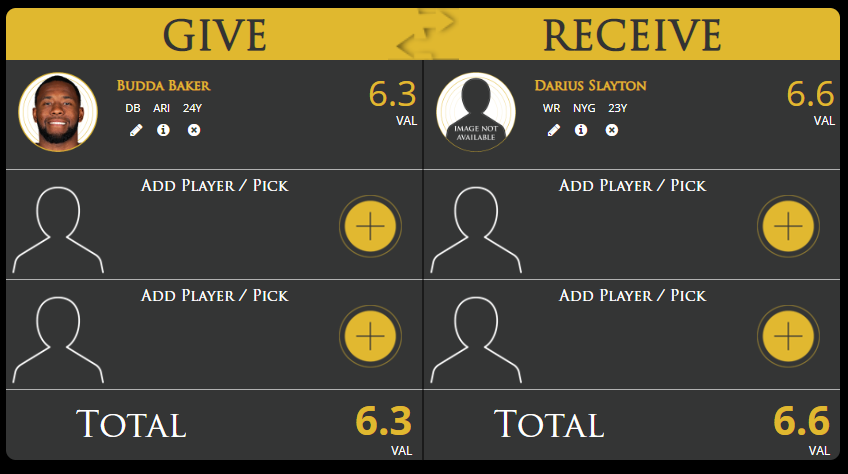 If you need wide receiver help you can capitalize and grab Darius Slayton. The Giants did nothing this off-season to upgrade the receiver position which leaves me to believe that the Giants are happy with Slayton. Slayton is a possible WR1 for the Giants and has some extreme upside with the Daniel Jones. 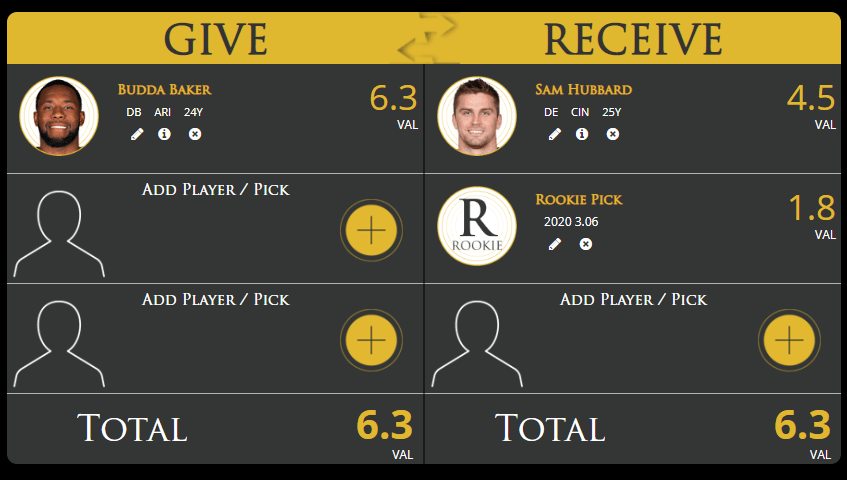 Here is where you find your true value when trading Budda Baker, going for another IDP stud. The defensive line is the hardest place to find value as most of the studs are scooped up early. One way to acquire them is through trade. Looking at the value above, you trade Budda Baker who is set for production decline and get Sam Hubbard who I have listed in my top 10 defensive end rankings which you can read here. To boot, you get a mid 3rd round rookie pick. For reference, rookies dropping in that range are guys like Willie Gay Jr., Antonio Gibson and Bryan Edwards, check out more rookie ADP here. Budda Baker can land you some great value and he is bound to decline making him one of the top IDP trade values.

Jordan Hicks is an absolute stud, don’t get me wrong. He was a top 3 IDP linebacker last year in all scoring formats, the top overall in some. But for the same reasons mentioned above, I am selling Hicks. The Cardinals added IDP vampire De’Vondre Campbell and rookie sensation Isaiah Simmons. I wrote about the effect that Campbell will have on Hicks in an article here. I do not see a scenario where Hicks comes close to the 150 tackle number. Take a look at some of the trade options.

Add Some running Back Depth 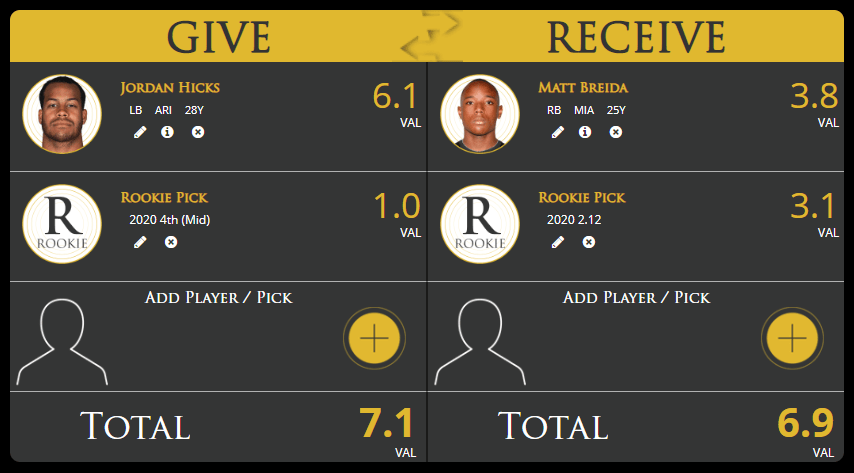 Here is an example of selling high on a guy and buying low on another. Matt Breida was acquired by the Dolphins during draft day in a trade with the 49ers. Many thought the Dolphins would draft a running back but chose to use their capital elsewhere. Breida has an instant opportunity to be the RB1 in Miami and has huge play potential every time he touches the ball. Then you add in a late 2nd round pick which at the moment could land you Laviska Shenault, Justin Herbert, or Jeremy Chinn. Hicks is bound to regress and all you would need to give up in this scenario is a mid 4th round rookie pick to go along with Hicks. 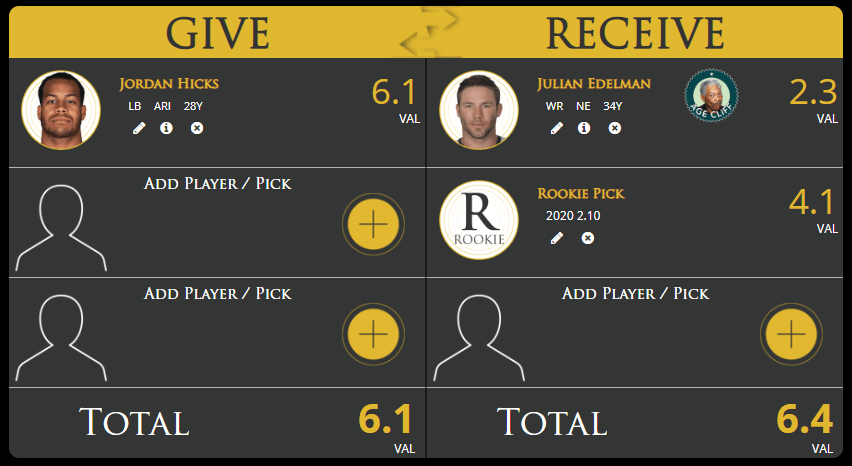 Here is a trade that I love to be honest. Many people are low on Julian Edelman this year because Tom Brady is gone. Edelman was a top 10 receiver last year in PPR formats. He is old but still has a few years left and can be a PPR monster again, especially running in the same offensive system. Plus with the 2.10 pick you can land Kenneth Murray, the first linebacker drafted in the 2020 draft. With this trade, you upgrade your receiver corps and get younger at linebacker. 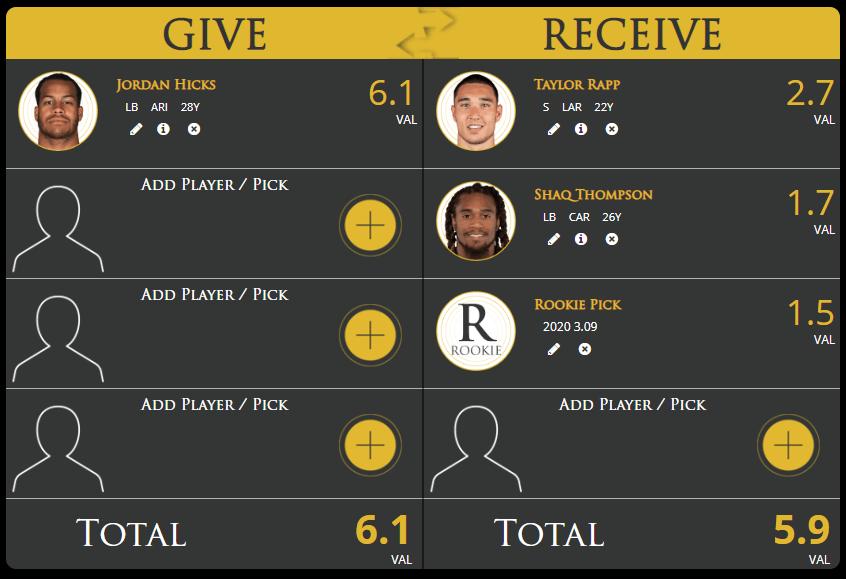 If you ask me this trade is incredibly lopsided…but it works. Taylor Rapp is an up and coming safety who showed great promise as a rookie and has legitimate top 10 potential at his position. Then to replace Hicks you get Shaq Thompson who is playing on a team that has over 270 vacated tackles, one year removed of setting his own career high in tackles. Add in the 3.09 rookie pick and you can get receivers like Chase Claypool or K.J. Hamler. There is a lot of upside in return with this trade. You win all three of these trades if you are shipping out Hicks making him one of the top IDP trade values.

Am I crazy for telling you to sell Danielle Hunter? Probably but his value is super high right now after two consecutive seasons with 70 tackles and 14.5 sacks. This is a scenario where I am not selling the guy because I feel like he will regress but more because other fantasy managers value him so highly. When managing your roster you need to realize when you can get max value for a guy, and that is what we are doing. Being the DL1 makes Hunter one of the top IDP trade values in the NFL. 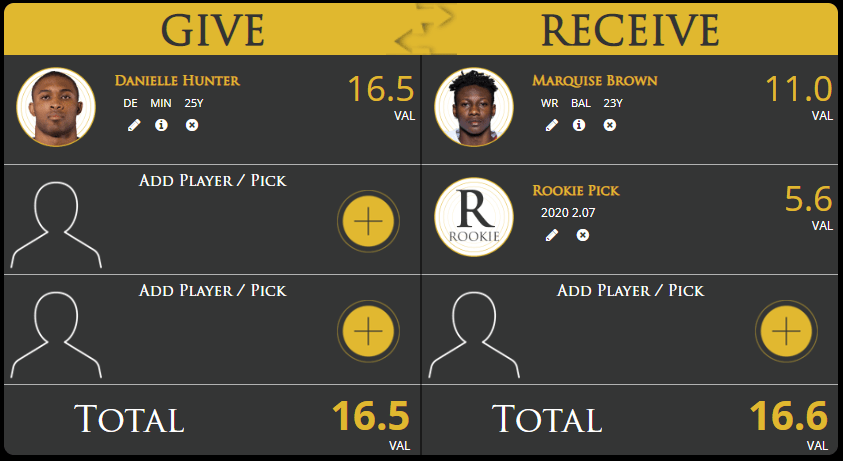 Here you ship out Hunter to land a high upside wide receiver. Marquise Brown is a YAC monster and showed good chemistry with quarterback Lamar Jackson. Brown likely would have had a better rookie season had he not been coming off of a lisfranc injury. Brown is a nice get, but the addition of the 2.07 rookie pick is the real bonus here. You can add the likes of Denzel Mims, Zack Moss and Tua Tagovailoa. Nabbing a top tier quarterback prospect and a possible WR1 for Hunter is very nice value.

Grab A High Upside Running Back 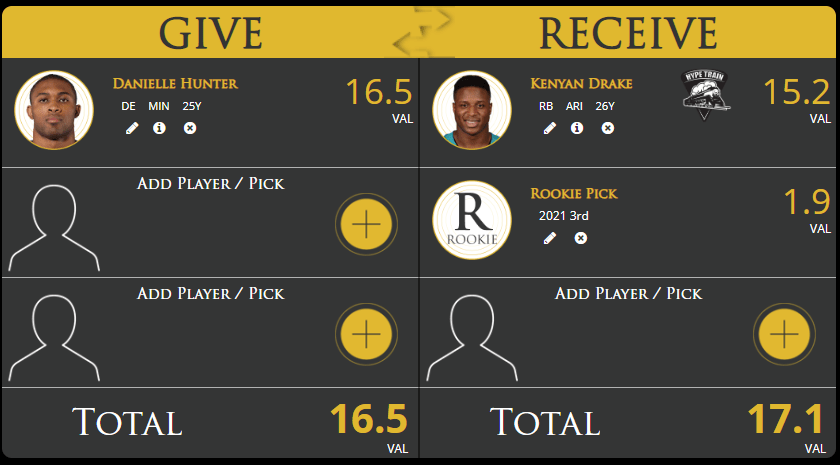 Danielle Hunter can land you a real nice running back option. Kenyan Drake has been one of the most hyped players in the NFL this off-season. He was one of the top 3 fantasy running backs over the last three games when the Cardinals let him handle a heavy workload. In those three games he rushed the ball 58 times for 363 yards at 6.05 yards per carry and seven touchdowns. He has top 5 running back potential and you add a 2021 3rd round rookie pick to go with it.

Replace Hunter And Then Some 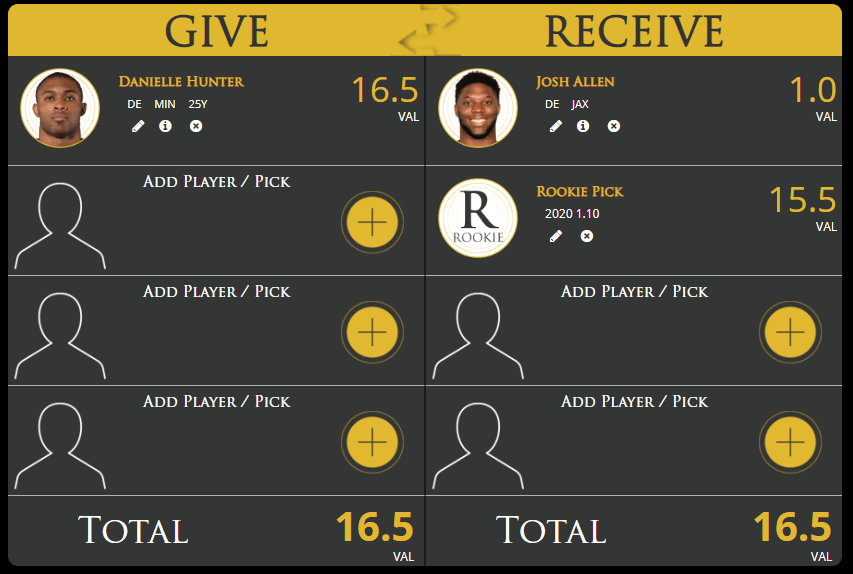 If you read my defensive line rankings article I attached above then you know that Hunter is my top ranked defensive lineman going into 2020. Josh Allen of the Jaguars though is ranked #6 overall in those same rankings. Allen is two years younger than Hunter and has incredible potential. During his rookie season Allen made 44 tackles and had 10.5 sacks while only being on the field for 60.4% of the team’s snaps.

His role is likely to increase this year with the departure of Calais Campbell which makes him even more intriguing. Then you add in a late 2020 first round pick, the 1.10 rookie pick, and this seems like excellent value. With the 1.10 rookie pick you can acquire the likes of Henry Ruggs, Justin Jefferson and you can also double down and get another promising defensive end in Chase Young. You could turn Danielle Hunter into Chase Young and Josh Allen…yes please.

These are my top IDP trade values at each position. I would like to thank The Dynasty Trade Calculator for joining with us in creating such a helpful calculator for IDP participants. Here you can see the many values you can acquire by selling some of these big IDP names. Whether you need help at receiver, running back, or want to upgrade your IDP depth, we have it all covered here.

Follow me on Twitter @JoeyTheToothIDP and check out all of my written content at idpguys.org and dynastyfootballdigest.com. Be sure to also order our rookie draft guides from each website. For the IDP rookie guide click here. For the Dynasty rookie draft guide click here. Check out and subscribe to dynastytradecalcutor.com and check out IDP trade values. Be sure to check out my new podcast coming soon, The IDP Update with Joey The Tooth.