In general, fantasy football leagues that involve IDPs or IDP only leagues tend to skew towards middle/inside linebackers and safeties. This is due to league settings emphasizing tackles over any other defensive play. I plugged in the following tackle heavy league scoring on ffstatistics.com, where you can customize your leagues scoring.

Filtering to look at the last three seasons, the top 50 fantasy IDP finishes include eight safeties and 42 middle/inside linebackers. The most sacks by anyone of these players was 5.5 by Carolina Panthers linebacker Thomas Davis in 2015. In fact, top non-middle linebacker/safety finish was 84th.

Changing leagues settings to emphasize more impactful plays like turnovers or sacks change the importance of defensive positions. Again, using the ffstatistics.com database, I plugged in the following sack-heavy scoring settings to see how the top 50 finishes changed.

Even with the change in scoring, 37 of the top 50 IDP finishes over the past three seasons belong to middle linebackers and safeties.  However, this means that 13 were pass rushers, including the top finish belonging to Houston Texans defensive end JJ Watt in 2015. This purpose of this article is to find the players to target in sack-heavy leagues. While the tackle monsters at middle linebacker and safety should be targeted first in all formats, this article will focus on the players that get a boost from emphasizing sacks, i.e. 3-4 outside linebackers and defensive ends.

Before getting into the players you should be targeting, a disclaimer; JJ Watt will not be on this list. Watt had one of the most dominant stretches by any defensive player ever from 2012-2015. He since played eight total games in the last two seasons. Watt has undergone two back surgeries and suffered a broken leg over the last two years. Because of this, I no longer think he is an elite defensive player and therefore does not belong on this list.

As a Denver Broncos fan, it pains me to say that Khalil Mack is the best edge defender in the NFL. Over the last three seasons, Mack has averaged over 12 sacks per season. But, what sets Mack apart, is that he has averaged over 75 tackles per season. This is why he has finished in the top 50 fantasy IDP players three times over the past three seasons using the above, sack-heavy scoring.

To emphasize how dominant he is, he led the league in quarterback pressures plus runs stop in 2017, over other guys in this article.

PFF Elite gives you our Premium Stats for every NFL player:https://t.co/tLuFupqHPA pic.twitter.com/1jvrA8QDlW

There is nothing else left to say. Mack should be the first guy off the board after the elite middle/inside linebackers and safeties.

Denver Broncos outside linebacker Von Miller has largely been considered one of if not the top edge rusher in the league almost his entire career. Miller has also been a model of consistency his entire career. Since his rookie year, Miller has produced double-digit sacks in all but one year. The year he didn’t, he tore his ACL.

Miller has also done well in the tackles category. In Miller’s six healthy seasons, he averaged 59 tackles and produced 57 or more tackles in five of the six seasons.

Along with Dallas Cowboy’s defensive end, Miller tied for the league lead in PFF’s pressure rate in 2017.

Von Miller and DeMarcus Lawrence produced pressure at the highest rate among edge defenders in 2017 pic.twitter.com/ud2KLh1LRA

Miller has also led the league for career pressure rate since 2006.

. @VonMiller has generated pressure on 17.3% of his pass rushes for his career, best of any defender since 2006. pic.twitter.com/NgjxiPLJWr

Possibly the most impressive thing about Miller is that he has been productive the last two seasons despite being basically on his own. Miller faces constant double and even triple teams and is the most chipped edge defender the past two season.

More unique data. The most chipped defenders in the NFL from last season and so far this year pic.twitter.com/cotg8IVoes

With the addition of Bradley Chubb in the draft, this may no longer be the case. With the potentially elite Chubb on the other side of the line, we may see Miller be more prolific than we have ever seen. The offense also made some upgrades, which could mean that the Broncos are playing from ahead or a neutral score. What this means is that the Broncos opponents could be throwing more often in 2018, resulting in more pass rush attempts for Miller. Regardless, Miller is still an elite pass rusher and should be taken early in sack-heavy leagues.

Much like Miller, Arizona Cardinals outside linebacker Chandler Jones has been very consistent over his career. Jones has produced double-digit sack totals in four of his six seasons, including the last three straight. He is less productive in stopping the run and averages less combined tackles. However, he still averages 53 tackles per season. He also finished fourth in PFF’s combined pressures plus run stops, as seen in the graphic above.

Jones is coming off of arguably the best season of his career, producing 17 sacks and 59 tackles. He also led the NFL in combined sacks plus hits, according to PFF.

Chandler Jones led the NFL in combined sacks and hits in 2017! pic.twitter.com/UA6hU8kVbc

Look for Jones to continue to produce great numbers from the edge in 2018 and build on his best season as a pro.

New Orleans Saints defensive end Cameron Jordan, like Jones, is coming off of arguably his best season. He ended 2017 with the most sacks of career with 13 and the second most combined tackles of his career with 62. While not nearly as consistent at a high level as Mack, Miller, and Jones, Jordan has still been able to produce good numbers throughout his career. In his last six seasons, Jordan has produced 7.5 sacks or more, including three double-digit seasons. In those same seasons, Jordan has produced 45 combined tackles or more. He averages just less than 10 sacks and 55 tackles, more than Jones, per season.

Jordan was the highest graded edge defender by PFF in 2017.

Cameron Jordan was our highest graded edge defender in 2017 pic.twitter.com/C2KtOWpx9Q

He also led the league in batted passes with 10 and was graded third best at stopping the run among pass edge defenders in 2017.

The Saints made a marked defense improvement, moving up from 375.4 yds/g (27th) and 28.4 pts/g (31st) in 2016 to 336.5 (17th) and 20.4 (10th). All the while maintaining their offensive prowess. Like Miller and the Broncos, this means the Saints’ opposition will be throwing more often and more pass rushing opportunities for Jordan.

While Jordan is not as well known as others on this list, he is still an elite pass rusher with continuously great production. You can pick Jordan later and receive similar to production to the household names.

Los Angeles Chargers defensive end Joey Bosa is the third player from the AFC West division to make this list. Those poor AFC West quarterbacks. Bosa has started his career with back to back double digit sack seasons. He has averaged 0.82 sacks per game in his career, more than anyone on this list.

In 2017, Bosa took a step forward stopping the run, finishing fifth in combined run stops plus quarterback pressures. His combined tackles moved up from 41 in 2016 to 70 in 2017. This on top of that highest pash rush for edge defenders by PFF in 2017. This all landed him as the top player in PFF’s top 25 under 25. 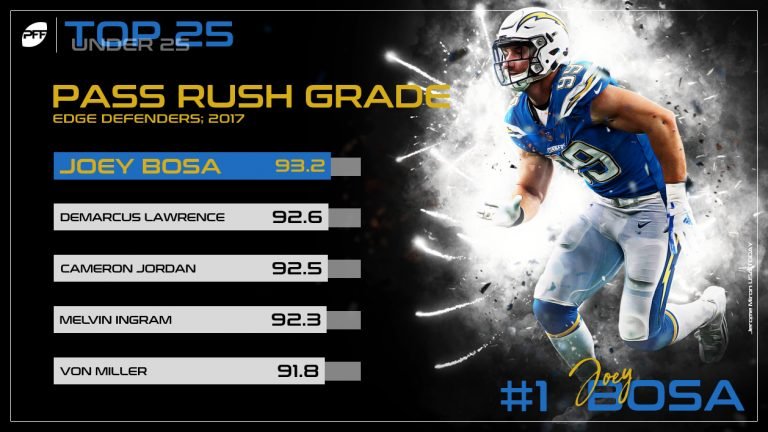 Bosa is one of the elite pass rushers at the age of 22. He took a step forward in 2017 and will continue to do so in the near future. Draft him and own possibly the best defender in the league for years to come.

Jacksonville Jaguars defensive end Calais Campbell hasn’t been the most prolific pass rusher but he has been consistent. Campbell has averaged just over 7 sacks and 57 tackles in his ten-year career. He is another guy who is coming off of his best season as a pro, racking up 14.5 sacks in 2017. Ranked number nine on PFF’s top 101 from 2017, he finished second only to Chandler Jones in quarterback sacks plus hits.

Yet another AFC West edge defender. Imagine how scary the Chargers defense is with Ingram and Bosa. Those poor, poor quarterbacks. Over the past three seasons, Los Angeles Chargers defensive end Melvin Ingram has averaged just under 10 sacks and 60 combined tackles per season. Ingram finished only three total pressures behind Khalil Mack in 2017. O, and he also dropped a mixtape for good measure.

Changing from tackle heavy to sack-heavy scoring doesn’t change the fact that the top end middle/inside linebackers and safeties will finish atop IDP rankings in fantasy production. However, sack-heavy scoring changes the second tier of IDP fantasy points. Mack, Miller, Jones, Jordan, Bosa, Campbell, and Ingram should be among the first taken off the board in these sack-heavy leagues. These players are largely considered some of the best edge defenders in the NFL and will consistently produce for your team.

IDP Player Projections With Joey The Tooth – The Beginning

The Best Values At Safety Based Off Of ADP