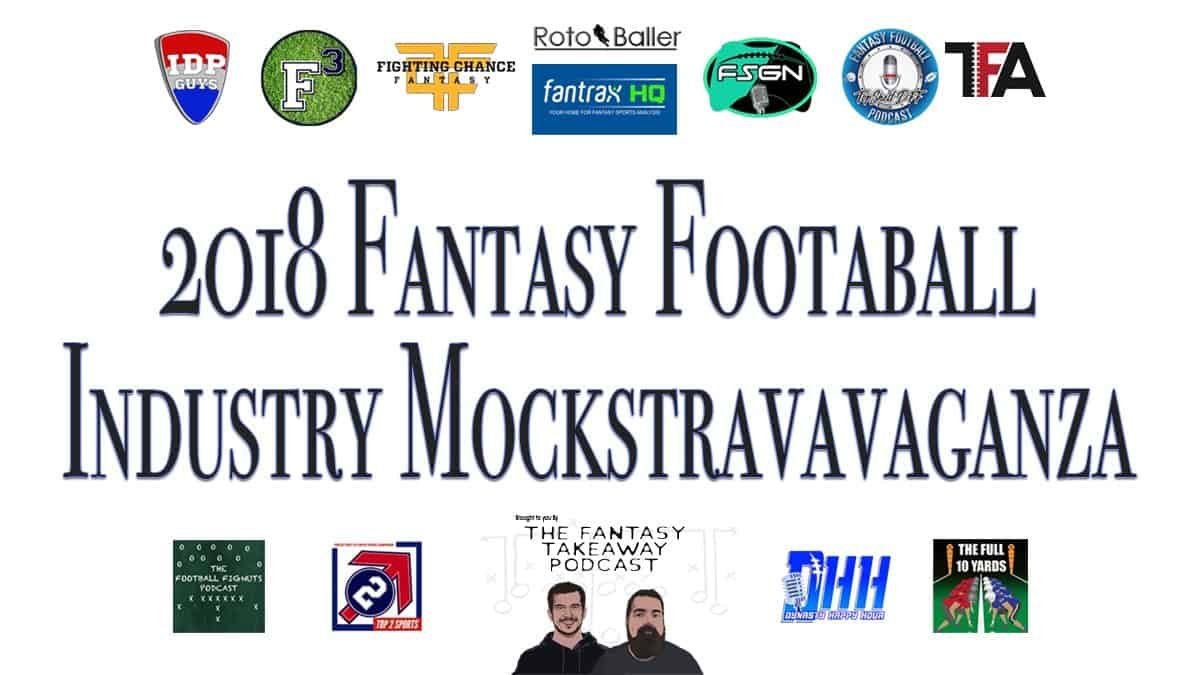 One of our writers, Brian Derario (@BrianDFF), joined other fantasy football experts in an industry wide Mock Draft.

As we get into the heart of “draft season”, a few members of the fantasy football industry and myself got together to do a mock draft and analyze every pick. It is an excellent way to compare our thoughts with your own while possibly reconsidering where you have players valued. As I go through every round this post will update. Feel free to reach out to me, @BrianDFF on Twitter, as well as the other industry members about what you think! At last, The 2018 Fantasy Football Industry Mockstavaganza!

The first overall pick went to @Tim_Monk85 and he chose Todd Gurley. For the reason that it will be extremely difficult for Gurley to repeat his production, which is why he is in my top 3. Still an excellent pick and I imagine it will go that way in many drafts. With the second pick overall, I decided to choose David Johnson.

That is why I have Johnson #1 overall in my rankings for re-draft leagues. He has that potential for 1,000+ in both categories with the way he was used in Bruce Arians’ system. We will see what Steve Wilks has in store for Johnson, but I imagine it will be hard to not feed a talent like that.

@FFStompy has the next pick. You can view his pick analysis here.

@FFStompy picked Rob Gronkowski directly before me. Gronk is a player I am targeting at the end of the second round or early in the third. Gronk has the ability to finish #1 at his position every year he is healthy. After following Tom Brady’s training regiment, Gronk played 14 of the 16 games and was able to remain healthy throughout the postseason. Look for him to have a fantastic season.

I followed that pick with A.J. Green. After a disappointing season riddled with bad offensive line and quarterback play, he still finished the season with over 1,000 yards and 8 touchdowns. He also saw the second highest targets of his career with 143. With a surely improved offensive line and hopefully a bounceback from what was a disappointing Bengals season, Green could see himself easily in the top-12 wide receivers and potentially a top-5 candidate.

@Tim_Monk85 is up next. You can view his picks with the analysis here.

@Tim_Monk85 picked Stefon Diggs directly before me. I believe Diggs has a ton of upside, but you wonder what his rapport will be like with Cousins. Look for him to finally break 1,000 yards this season, with Cousins having a history of supporting two 1,000 yard wide receivers (Jackson and Garcon).

I followed that pick with Larry Fitzgerald. Fitzgerald, since moving to the slot, has seen three consecutive seasons with 100+ receptions and 1,000+ yards. Look for Bradford and/or Rosen to target him heavily, as he will remain a focal point of that offense.

@FFStompy has the next pick. You can view his pick analysis here.

Be sure to follow my work @BrianDFF on Twitter. I write for @F3Pod as well as the @IDPGuys. I also have a podcast with @Hbogart27 on the IDPGuys network called the IDPGuys Writers pod.

Avid Fantasy Football fan now turned "analyst". “An expert is a man who has made all the mistakes which can be made, in a narrow field.” – Niels Bohr. I will be the person to draft Blake Bortles and cry about it later so you don't have to.

Week 12: One Week Out From Fantasy Playoffs

The Big 3 IDP Podcast
Looking for an edge in your IDP fantasy football league? Let the Big 3 guide you down the path to a championship! Josh Raymer, Adam Marcum, and Connor Raymer grew up playing fantasy football and have become obsessed with the defensive side of the ball in recent years. The Big 3 IDP Podcast brings a mix of humor, high-quality production values, and quick-hitting IDP analysis you can't find anywhere else. When it comes to IDP, you gotta have the Big 3! Also home to The Injury Report with Dr. Leezus and DF$$$, hosted by Adam and Johny the Greek from IDP Guys. Support this podcast: <a href="https://anchor.fm/big3idp/support" rel="payment">https://anchor.fm/big3idp/support</a>
Week 13 Waivers + Who Do You Trust?
by Josh Raymer

A banging new intro song AND new cover art??? It’s Christmas come early in the virtual Sode Shack as Josh, Adam, and Connor gather together for their meatiest pod in a while. On the eve of Week 13, The Big 3 hit the news before GOING IN on some key waiver additions (offense and defense, with a dash of dynasty IDP) and rate their trust in 18 players who could make or break fantasy seasons. Let’s go win some games and make those fantasy p-offs! Shout out to our patrons Joseph, Bobby, Jason, Nico, Lorne, Aaron, Tom, and djkelltown! Follow the show @Big3IDP on Twitter and Instagram, give us a 5 star rating and review on Apple Podcasts, and consider supporting the show over on Anchor. Thanks for listening!