I’m in three dynasty leagues and the last two weeks of August are spent doing a two-round draft, followed by free agency. This is so each team can help fill out their rosters so they are legal, going into week 1. Additionally, it allows owners to add players who are having great training camps. I’ll be going through each defensive position to give you some of my thoughts on if these guys should be added.

This 10-year veteran was projected, by MFL, to finish as the top defensive tackle before Aaron Donald had a position change from defensive end to defensive tackle. It’s always a bonus when you can add a top two defensive tackle off waivers. He’s a must add for those that need to start a DT in dynasty leagues.

This rookie looks to have nailed down the left defensive end spot along the Patriots defensive line. I foresee him playing a lot of snaps each week. In his preseason week 3 game, he had 1 solo tackle as the starter. He’s a great taxi squad add and could be a sneaky weekly starter.

He’s the starting right defensive end along the Cleveland Browns defense. Opposite of him is Myles Garrett, which is some people’s top DE this year. With defenses focusing on Garrett, that should open up plenty of chances for Vernon to stuff the stat sheet. In his preseason week 3 game, he had 4 total tackles, 2 solo tackles, 2 sacks, 2 tackles for loss, and 3 quarterback hits. He’s a must add and a nice value as a weekly starter.

This 22-year-old rookie, from Boston College, has burst onto the scene since the release of Robert Nkemdiche. He’s nailed down the starting left defensive end job with a strong preseason week 3 performance. He had 2 total tackles, 1 solo tackle, half a sack, 1 pass deflection, and 2 quarterback hits. He’s a must add and a weekly starter in my opinion.

The Seattle Seahawks are very thin at defensive end. They are hoping that Collier and Ezekiel Ansah, who are working their way back from injuries, can be ready for week 1. If he can be ready for week 1, Collier makes for a sneaky bye week fill in with the potential to be a weekly starter in deep dynasty leagues.

One leftover tidbit from #Seahawks camp yesterday before I head out to #49ers practice: First-round DE LJ Collier’s ankle sprain is unusual because it’s the top of his foot, I’m told. It rarely happens, but it did for Collier. He has a legit shot at being ready for Week 1. 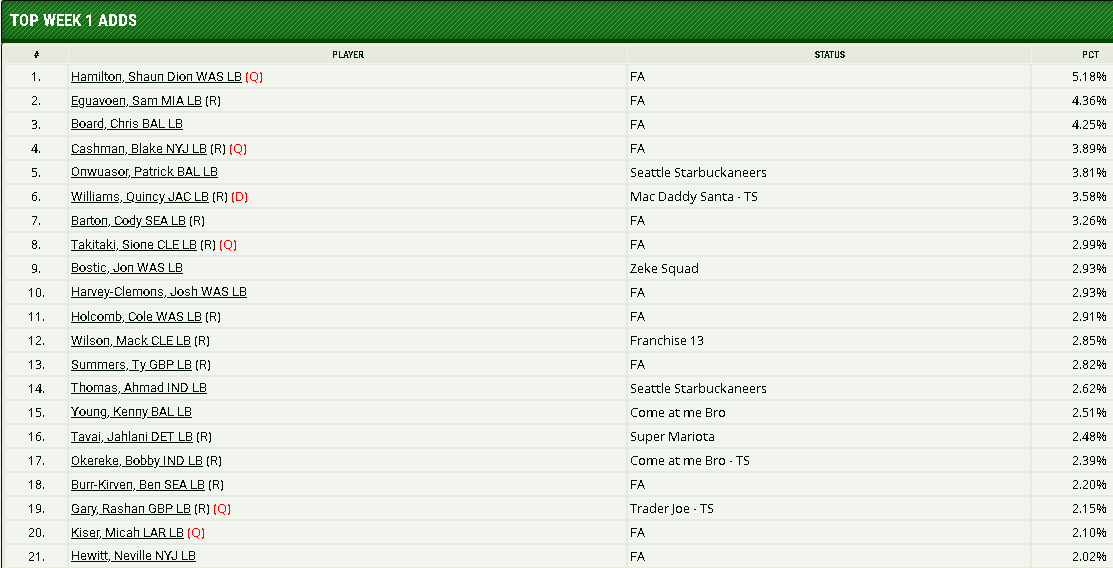 Linebacker is the highest scoring position in most dynasty leagues. Anytime you can get two starting middle linebackers off waivers, take it. Hamilton makes for a great taxi squad add and could be a nice weekly starter depending on how he does the first month of the season. Bostic was a player I added off of waivers last year and he helped me win a championship. In his preseason week 3 game, he had 5 total tackles with 4 being solo tackles. He makes for a great LB 3/4 as a weekly starter. With the injury to Reuben Foster and the release of Mason Foster, opportunity is abundant. Take a chance.

This was a player that @Mike_Woellert recommended to me when I was looking for linebacker depth. With so much uncertainty surrounding Kiko Alonso and his roster status, Sam has taken advantage. In his preseason week 3 game, he had 5 total tackles, with 3 being solo and 1 tackle for loss. He makes a great taxi squad add with nice upside until the situation with Alonso plays its self out.

Starting middle linebacker Jarrad Davis suffered an ankle injury, in the 1st quarter, of the Lions 3rd preseason game. With no timetable for Davis’ return, Jahlani will see plenty of snaps as the starter. He had 1 total tackle and that was a solo tackle. He’s a must add with weekly starting potential in dynasty leagues.

I feel that Williams, as a press man specialist, will be the starting right cornerback across from Denzel Ward come week 1. He’s currently battling Terrance Mitchell. In preseason game 3 they both has 2 solo tackles each, with Mitchell adding 1 pass deflection. Greedy makes for a great taxi squad add.

He’s locked in as the starting free safety next to strong safety Landon Collins. Nicholson is in line for a 3rd-year leap. With the Redskins offense uncertain, this defense will have to step up if they want to remain competitive. He projects to finish as safety 43 in MFL and makes for a solid safety four in dynasty.

With the loss of strong safety Derwin James for about three months to a foot injury, Phillips will have a great chance to be an early season contributor. He was very productive in his preseason week 3 game. Adrian had 6 total tackles with 5 of those being solo tackles. He’s a must add and a great weekly starter in dynasty as a safety 3/4.

Burnett is a bonus add I thought I would throw in for you guys. He’s projected to finish as safety 29 in MFL, behind Eric Reid and ahead of Earl Thomas. He makes for a strong weekly starter as a safety three/four. I’ll be looking to add him to my dynasty teams in hopes he can be an under the radar difference maker.

Being able to add a player ahead of the regular season that can improve your dynasty team is a move that everyone wants, but few take the time to research. As you can see each defensive position has hidden gems, late in the preseason. Hopefully, you found these recommendations useful as roster cutdowns loom. Please keep an eye out for these articles during the regular season.