Khalil Mack, Joey Bosa, and Cameron Jordan are well-known names, among others, in the IDP community as top-tier defensive ends. This article goes over lesser known or forgotten about players at defensive end you should know that have been consistently productive and can be had later in drafts.

I will not waste anyone’s time listing off these players’ statistics and qualifications. The point of this series is to talk about lesser known or forgotten about players who have been consistently productive in their careers or are poised for a breakout and can be acquired for much cheaper. I wrote about linebackers here and safeties here. I present to you, the unsung heroes of IDP.

If you have been following the Unsung Heroes of IDP series thus far, you have found that I value consistency above all else. This is why Cincinnati Bengals defensive end Carlos Dunlap makes this list. You won’t normally find Dunlap at the top of sack lists; he only has one double-digit sack season.

However, he consistently produces good sack numbers with good tackle numbers. In his career, Dunlap has averaged 8 sacks per season, over half a sack per game. Over his last six seasons, he has averaged over 52 combined tackles. While the numbers aren’t elite, before the 2017 season, Dunlap led the league in quarterback pressures since 2013, according to PFF. He also leads the league in quarterback hits since 2013.

Carlos Dunlap has been a model of consistency on the left side for the Bengals pic.twitter.com/SHQmb9Gsz8

Dunlap is more than just a pass rusher. He has shown to be an extremely instinctual football player. When he hasn’t been able to get to the quarterback, Dunlap knows when to get his arms up and bat the ball down. The 6’6″ defensive end leads the league in batted passes for edge defenders since 2016 with 20. This is an added bonus for leagues who reward passes defended.

Carlos Dunlap has the most batted passes among edge defenders over the last two years! pic.twitter.com/PvRO3FShib

While I always recommend drafting elite players at shallow positions like defensive end early, if you miss guys like Mack, Bosa, Jordan, etc. Dunlap is a good second-tier defensive end you can rely on to give you production.

Former Los Angeles Rams and current Miami Dolphins defensive end Robert Quinn was once thought of as an elite edge rusher. Quinn produced three straight double-digit sack seasons from 2012 to 2014, including a 19 sack season in 2013.  Injuries derailed Quinn’s next two seasons, resulting in only 8 and 9 games played in 2015 and 2016 respectively.

Finally healthy in 2017, Quinn was able to produce 8.5 sacks in 15 games. While not the double-digit sacks we are used to, still a productive season. Quinn hasn’t been nearly as prolific of a tackler as Dunlap, but he has shown that he can produce decent tackle numbers. In 2013 and 2014, Quinn put up 57 and 46 combined tackles respectively. 2017 saw only 32 combined tackles by Quinn. He has also been extremely successful in forcing fumbles, another bonus for fantasy scoring.

The relatively low numbers from Quinn in 2017 may have been due to Quinn effectively playing out of position. In the 2017 offseason, the Denver Broncos let defensive coordinator Wade Phillips’ contract expire. Phillips then signed on with the new coaching staff of the Rams. Phillips’ base defensive scheme is 3-4, that is three linemen and four linebackers.

The departing coaching staff implemented a 4-3 (four linemen, three linebackers). Edge rushers typically play outside linebacker in a 3-4 base. So Quinn, having played his entire career up to that point as a 4-3 defensive end, switched to playing 3-4 outside linebacker. Combined with coming off of multiple injuries over two seasons, including a back injury, the last three seasons of Quinn’s career have been less than stellar.

In the 2018 offseason, Quinn was traded to the Dolphins. The Dolphins use a 4-3 base scheme. Quinn will be able to play with his hand in the dirt again as a defensive end. Quinn will line up across from another prolific pass rusher in his own right in Cameron Wake. Wake has averaged over 10 sacks per season in his career. The move back to defensive end and lining up across from Wake may allow Quinn to produce closer to what we saw in his 2012-2014 stretch.

Another thing that I have emphasized in this series is tackles. In most IDP leagues, tackles are king. After several up and down seasons, Chicago Bears defensive end Akiem Hicks has become the one of the best at his position, 3-4 defensive end. The last two seasons with the Bears, Hicks has produced 53 and 54 combined tackles in 2016 and 2017 respectively. He was also able to sack the quarterback  7 and 8.5 times in those respective seasons. Hicks’ numbers have been boosted by his elite third-down pass rush productivity and run stops.

Akiem Hicks has been a different player in Chicago pic.twitter.com/t4f7Cg8r0G 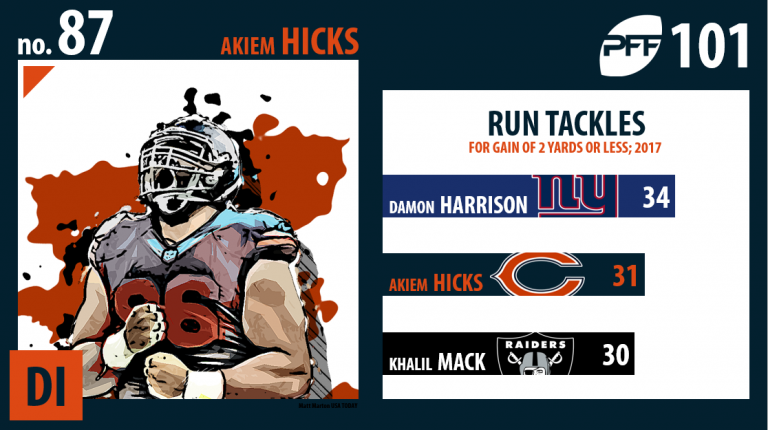 The defensive staff was actually kept on despite the turnover. The Bears also signed free agent wide receivers Allen Robinson and Taylor Gabriel as well as tight end Trey Burton. They also added linebacker Roquan Smith and wide receiver Anthony Miller in the draft, among others.

What do all of these changes mean? First, the defensive staff staying on is huge for Hicks and the Bears defense. Coaching continuity is important in the NFL. Players are allowed to learn a system inside and out and become comfortable. Hicks realized his potential under defensive coordinator Vic Fangio, racking up 15.5 sacks in the last two seasons compared to 9.5 the previous five seasons.

Second, the offense should be much improved in 2018. This will presumably lessen the amount of time the defense on the field, allowing them to be more effective when they are on the field. Of course, this could also mean that the defensive players have fewer opportunities to make plays and rack up fantasy points. I choose to believe the former.

The main goal of all fantasy football players is to find value. Guys like Khalil Mack, Joey Bosa, and Cameron Jordan will lead defensive ends in terms of fantasy points. But defensive end is a relatively shallow position in IDP. This is why I recommend drafting the defensive end position early. But if you miss out on the elite players, you need to find elite production at other positions and find value late at defensive end.

The guys listed above probably produce elite stats. Found in the later rounds though, they are worth the risk because they have the chance to put up good to even great IDP numbers. If nothing else, they will at least give you good depth. Consider the above defensive ends late in your drafts for the chance that they can help you dominate your leagues.

1 thought on “The Unsung Heroes Of IDP Series: Defensive End”