As we enter the final week of the fantasy football season, many owners are turning their eyes toward 2019. Before waiver wires close for the offseason, the following are stashes for 2019.

If you have been following the IDP Guys this season, you will know the name Foye Oluokun. That is because multiple writers have been on him early. Immediately after Atlanta Falcons star linebacker Deion Jones was placed on IR, Gary VanDyke (@HBogart27), the “IDP Tipster”, told you to pick the rookie linebacker before anyone knew he would take over the starting job. I personally wrote about why Oluokun would help the Falcons weather the loss of Jones.

IDP players who followed our advice were handsomely rewarded. Oluokun took the starting job from Duke Riley in week 6, out-snapping him in every game since.  Oluokun has 79 tackles in 14 games along with one forced fumble and one pass defended. Since overtaking Riley, however, Oluokun has 78% of his tackles in 64% of his games played.

What a collision. I watch a LOT of football, and it's not often you get a pop like this going both ways without it being penalized. Zeke put some extra off the hesitation to try to pick up an extra yard and ?Foyesade Oluokun? (rookie from Yale) closes the book on him… pic.twitter.com/WIWc2CGgth

Jones returned in week 13, reducing Oluokun’s snaps. However, Oluokun still out-snapped Riley, effectively making him the starting weakside linebacker. He has 17 tackles in three games since Jones’ return as well, proving that Oluokun can be productive playing next to Jones. Oluokun looks set to be the starting weakside linebacker for the Falcons in 2019. Already proving productive in his rookie season, Oluokun should be stashed in all leagues if he is still available.

Another IDP Guys favorite. Again, the “IDP Tipster” was on Denver Broncos rookie linebacker extremely early on. I, again, followed up with the first ever article in the IDP Rookie Watch series.

Jewell is the perfect replacement for one of the Broncos starting inside linebackers. Both the “IDP Tipster” and I were wrong about which one. We both thought that Jewell was Todd Davis‘ replacement. The Broncos have struggled with covering tight ends and running backs, much to their demise. Todd Davis was a large part of the issue, scoring a 47.3 grade in pass coverage in 2016 by PFF and 45.5 in 2017, both well below average. Jewell, meanwhile, demonstrated excellent skills in coverage in college. However, Todd Davis is having the best season of his career, having already surpassed his career high in tackles in only 14 games. Davis has also been good in coverage, with an interception and seven passes defended.

Davis is also signed through 2020, though his dead cap hit drops below his cap hit in the 2019 season. Fellow starting linebacker Brandon Marshall is also signed through 2020. However, Marshall will make $9M next season and $9.5M in 2020 if the Broncos exercise their options and would save $5M and $7.5M if they do not. With Marshall’s injury history, including in 2018 having missed five games, the Broncos may choose not to exercise those options.

Drafting Jewell has also made Marshall expendable as Jewell’s skillset is nearly equivalent to Marshall’s. In Marshall’s absence this season, Jewell was given an extended look. While he was not prolific, Jewell did produce five or more tackles in 4-of-6 games that Marshall was out. On the season, Jewell has 47 tackles and three passes defended. If the Broncos choose not to exercise their option on Marshall, Jewell slots in as a starting inside linebacker. Thus, he is a stash.

Yet another one of the “IDP Tipster’s” favorite future prospects. Philadelphia Eagles linebacker Kamu Grugier-Hill was running with the first team in OTAs, prompting the “futures” designation.

Grugier-Hill did not see many defensive snaps in his rookie and sophomore seasons, playing behind Mychal Kendricks.  Grugier-Hill was given his chance after Kendricks release before the 2019 season. Despite the Eagles signing former Denver Broncos linebacker Corey Nelson to a one-year deal to compete for a starting job, Grugier-Hill earned the starting weakside linebacker job and Nelson was released.

Though Grugier-Hill has only played in 33% of the defensive snaps through week 15, he has still been productive. Using the “IDP Tipsters” Playmaking Ability Per Snap (P.A.P.S.) metric, Grugier-Hill makes a play every 6.5 snaps. This is just below elite linebackers like Luke Kuechly and Bobby Wagner and better than guys like Telvin Smith and Blake Martinez, who some may consider elite. You may also notice that Gruiger-Hill has the best P.A.P.S. among the Eagles starting linebackers. 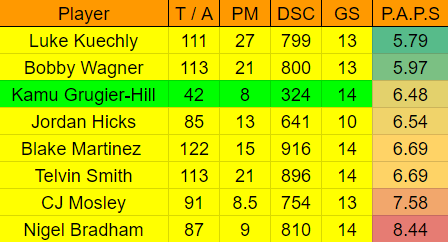 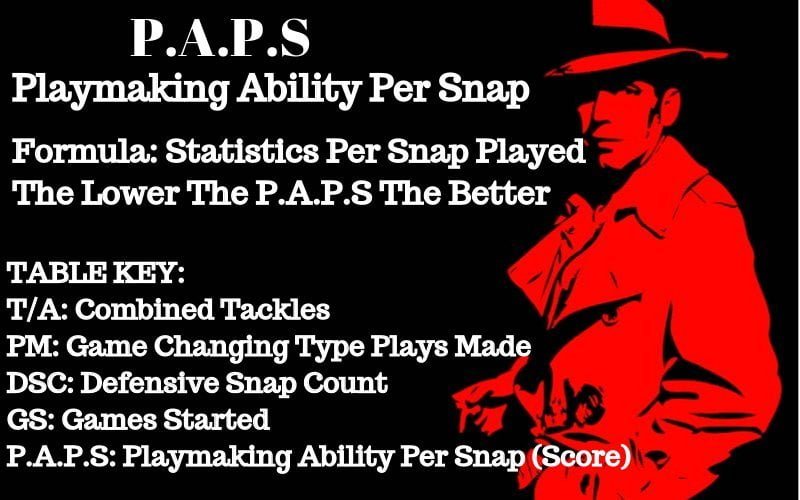 Eagles starting middle linebacker Jordan Hicks is an unrestricted free agent after the season. It is not known whether or not the Eagles are interested in bringing him back. Hicks has an extensive injury history, missing 20 games in his four-year career through week 15 of the 2018 season. The Eagles may not want to pay for an injury prone player, especially with the emergence of Grugier-Hill. If that is the case, Grugier-Hill may be in line for a bump in snaps and therefor IDP value. Thus, he is a stash for 2019.

You may have figured out a pattern at this points. Most, if not all of the players on this list, are guys that the IDP Guys have liked early on. I wrote on Baltimore Ravens rookie linebacker Kenny Young in an installment in the Rookie Watch series. The Ravens have been looking for a starter next to Mosley to replace Zach Orr since Orr’s abrupt retirement. Young may be the guy the Ravens have been looking for.

The Ravens struggled in coverage against tight ends in 2017, which is part of a middle and inside linebacker role. Patrick Onwuasor started next to Mosley in 2017. While he was good in run defense, Onwuasor struggled in pass coverage and thus is not a good starter next to Mosley. Enter Young. Young demonstrated ability in pass coverage in college. Young’s speed gives him the ability to be a legitimate three-down linebacker as well.

Early on in the season, Young was able to demonstrate his abilities. In week 2, Mosley went down with a knee injury early, allowing Young to play most of the game and start in week 3. In those two games, Young produced 13 tackles and two tackles for loss. On the season, Young has 49 tackles, one pass defended, and one forced fumble.

Onwuasor’s contract is up after the 2018 season. So is Mosley’s. While there seems to be interest in extending Mosley from both sides, it is not known if the Ravens want to bring Onwuasor back. The drafting of Young seems to signify that the Ravens want to move on. Onwuasor and Young have essentially split snaps. If Onwuasor is gone, Young likely takes over the starting role and sees a significant uptick in snap share. Young has the skillset and potential future opportunity to be a stash for 2019.

One more of the IDP Guys favorite under-the-radar linebackers. A converted safety, Los Angeles Chargers rookie linebacker Kyzir White is a glimmer of hope for the Chargers linebacking corp.

The Chargers were extremely thin at linebacker in 2017. They also struggled against the run. White excelled against the pass and also demonstrated the ability to stop the run. These skills and a good preseason allowed White to start at weakside linebacker to start the season.

White had a great start to his career. In three game, White accounted for 17 tackles, one interception, and two passes defended. Unfortunately, White was placed on the IR with a knee injury, ending his season.

White has likely been forgotten about since he only played in the first three games, making him a stash for 2019. Already having earned a starting spot, White should once again be starting at weakside linebacker for the Chargers in 2019. If he is available, he should be stashed in all leagues. White is a breakout candidate in 2019 if he stays healthy.

These linebackers have a chance to have productive or breakout seasons in 2019. Most if not all are likely available on the waiver wire. Take a risk and pick them for the chance at an uptick in value or cheap production.

For more tips and analysis, follow Sam on twitter here. Get even more depth analysis and tips from the IDP Tipster here. Listen to the guys talk about news, analysis, and strategy on the podcast, and follow the show on twitter @IDPGuys.

4 thoughts on “IDP Fantasy Football Players To Stash For 2019: Linebackers”